You are here: HomenextPlacesnextEntertainmentnextS.S. BrightonnextIntroducing the Sports Stadium Brighton archive 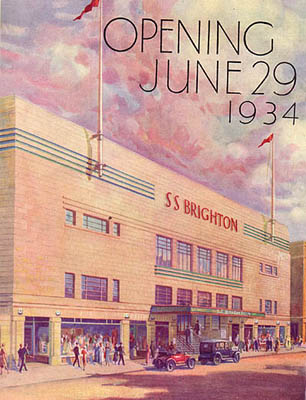 My interest in the Sports Stadium came to light in 1995 when a friend of mine asked about my days playing ice hockey at the S.S. Brighton. His sons were doing a project at Brighton College and he was interested to know if I had any photographs of those days that his boys could include in their project. I eventually found a couple he could copy and this set my mind working to find out if anyone had more photographs.

First appeal to the Evening Argus
A letter to the Evening Argus appealing to readers for information regarding the SS Brighton was rewarded with a letter from a lady reader. Her husband had originally been involved with the rink as a speed skater and had started to put together the history of the rink. Unfortunately he had passed away before he could get far into the project, but she kindly gave me all that he had collected to date and this led me to my current collection.

The letter to the Argus started a domino effect as one person after another led me to someone related to the rink. Eight years later this unique collection has grown to over four thousand photographs on all aspects of the rink and its many patrons and stars. Along the way I have been very lucky to meet many of the stars that appeared at the rink and have amassed many items of memorabilia from them in their heydays. Many of the stars I’ve met through my project were the same stars I sat in front of all those years ago as a young boy, when they performed in the many ice spectaculars at the rink.

The social hub of Brighton in its heyday
I hope this profile of my young days in a town that has changed beyond all recognition will bring back some memories to people who remember the SS Brighton. One lasting memory for people will be the famous Tigers, one of the greatest ice hockey teams in the country and Europe. Most people over the age of fifty would have had some connection with the SS Brighton, as it was the social hub of Brighton in its heyday.