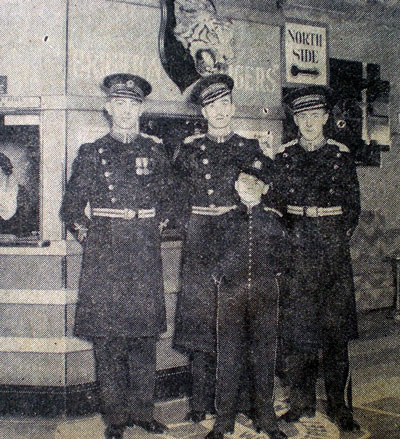 Commissionaires & Bellboy at the SS Brighton in 1936.
All photos from the private collection of Trevor Chepstow. 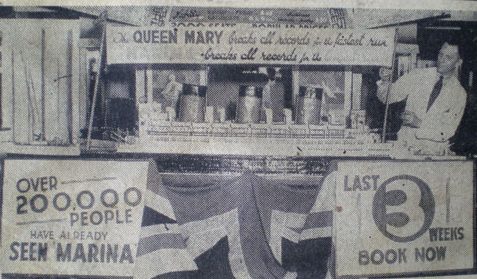 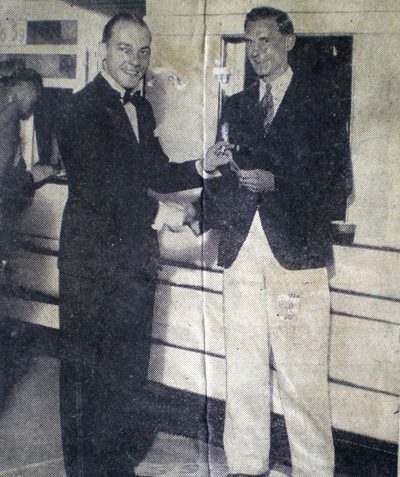 Mr T. Toynbee receiving a free season ticket for being the 100,000th person to see the show "Marina" in 1936 by the General Manager Mr D. Mitchell. 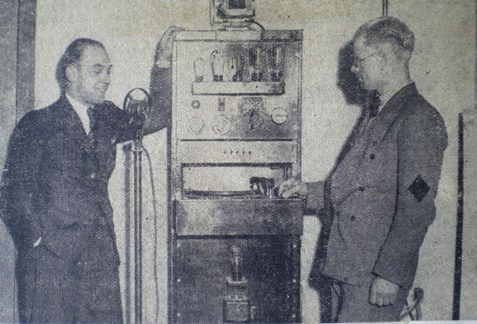 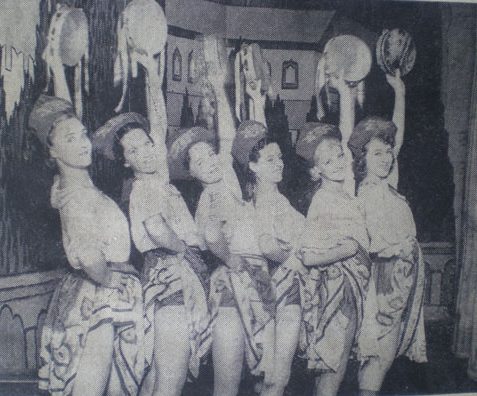 The "Grafton Girls" from the show "Marina". 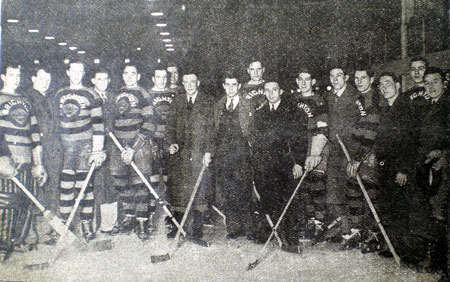 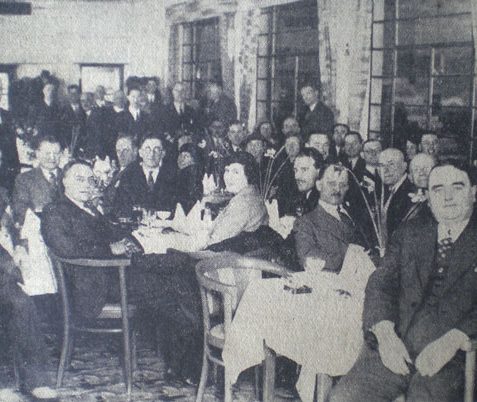 South East Association of Sanitary Inspectors at lunch in the "Silver Grill" restaurant at the SS Brighton in 1936. 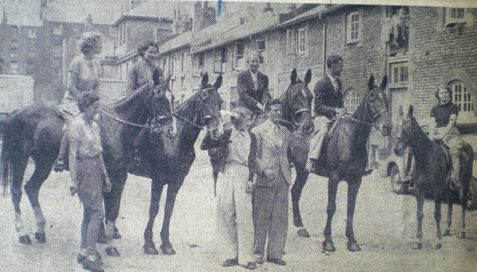 Stars from the show "Marina" at the South Down Riding Stables, 1936.

The photographs of the Sports Stadium on this page have an unusual provenance, having been rescued from the fate of a burning dustbin in the final stages of demolition of the rink in 1965!

The scene in 1965
In the latter part of 1965 (Nov/Dec) all that remained of the SS Brighton was the large cream fronted section of the Art Deco building.  The rear skating area was already demolished and the front just waiting for its final hour.  Next to the rink the new Top Rank “Kingswest Centre” was taking shape.  This was to be the Brighton’s new entertainment centre containing cinemas, bars and last but not least, a small ice rink.

Local sadness
The passing of the rink saddened many people in Brighton and one person in particular was more upset than most, a gentleman called Rodney Ward.  Rodney was a keen skater having belonged to the Brighton Dance Club at the rink and where he met his wife Lorna. His sister (Jacqueline Ward) was one of the top stars in the Tom Arnold ice shows and also an instructor at the rink.  She married Jackie Dryburgh the captain of the famous Brighton Tigers; their two sons represented Great Britain at the Olympics in the British Curling Team.

Left with only memories
Most lunch times Rodney would cycle the short distance from his office at the Argus in North Road and sit eating his lunch opposite the rink.  Each day brought further dismay as his beloved rink gradually disappeared in front of his eyes.  The final realisation that his skating days were over was when he thought of how little he had of the rink! The only thing he had of the rink was memories.  Lunch was soon forgotten as this thought sparked an emotional reaction from him!

A daring rescue
Plucking up courage he strode across the road and into the main entrance, disregarding the workmen and rubble he marched up to what had been Benny Lee’s (managing director) office.  The room was in total disarray, with items strewn across the floor and a large dustbin in the middle of the room where items were being burnt!  In his panic to save something he grabbed a large ledger; the ledger was just about to go the way of the rest of the items and staggered out of the rink with it.

Saving a piece of history
The sight of Rodney struggling up West Street with this big ledger strapped to back of his bike must have been a sight to behold!  Much to his dismay on his return the next day, nothing was left to recover.  His only thought that lunchtime was that he’d help save a piece of history!

Unique momentos
The ledger itself was marked Number 2 and covered June/July of 1936 and is packed with press cuttings and skating photographs of the period.  The ledger may have one of dozens as it was common practice at the time to save press cuttings for reference.  This one contained many items relating the first professional ice show (“Marina”) held at the SS Brighton in 1936.

Rodney Ward is sadly no longer with us, due to his foresight this important piece of Sports Stadium history was saved and a unique piece of Brighton heritage.