By the time the 1959/60 season had commenced The Sports Stadium had changed its name to The Brighton Palladium. This was much to the dismay of the many loyal Tigers supporters. The owners had aspirations to turn the place into an entertainments venue staging variety shows, pop concerts, boxing, wrestling, indoor tennis, and conferences. Needless to say the ice rink would be boarded over more often than not, denying the Tigers ice time and the public, general skating. 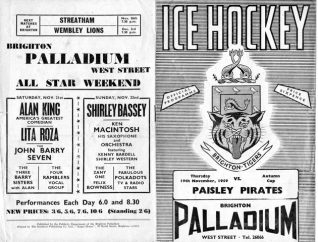 Ice Hockey programme: click on image to open a large version in a new window

There was even speculation and rumour that The Tigers were playing their last season there. However, General manager Benny Lee, was an ice hockey man to the core, he was also a very shrewd, smooth talking business man, well known locally, and in the wider ice hockey circles. In the spring of 1960 he announced in his programme notes of 20th March 1960, that ice hockey and general skating would continue for another year. For the next couple of years skating, ice hockey and the ever popular Tom Arnold ice shows, continued to be staged alongside indoor sport and variety shows. 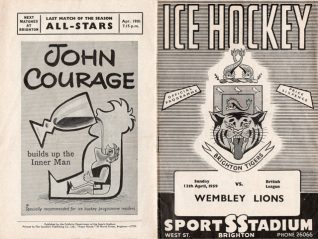 Ice Hockey programme: click on image to open a large version in a new window

It was all change again in 1962 when Top Rank took over as owners. One of the first things they did, much to the delight of the Tigers fans was to reinstate the name ‘Sports Stadium’. By that time the Tigers were playing intermediate hockey and most of the players were British which was great for them. However, by then the glory days were long gone. Sadly match nights at the Sports Stadium never regained the same exciting atmosphere of the 1950s.

Amid public outrage, in 1965 The Sports Stadium was demolished. What happened after that is well documented elsewhere on this site. Looking back now from a senior perch, I feel most fortunate to have been part of a generation who grew up, and spent their teenage years in the late 1950s and early 60s here in Brighton. I was also fortunate to have been very much part of that same generation that helped shape and influence the decade that later on became know as “The Swinging Sixties”.