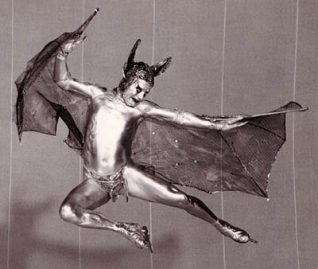 In the summer of 1936, an ice skating spectacular was presented at the S.S. Brighton. It was to be called “Marina” and was the brainchild of Claude Langdon, then managing director and Denis Mitchell, the general manager. This new spectacular was an instant success and caught the imagination of the public.

A King Bat in silver paint
One of the funniest acts, was performed by a Irish-Canadian gentleman called Red McCarthy. Billed as the world champion of barrel jumping, Red McCarthy would tear round the ice rink, frightening the life out the audience, whilst dressed as a King Bat and covered from head to toe in silver paint. The paint was compiled of powdered glass and silver nitrate, which under the lights produced an amazing glittering effect, thus emulating all the colours of the rainbow with startling results. It took him one hour to put on his make up and as long to take it off, the removal necessitating a steam bath and powerful sprays.