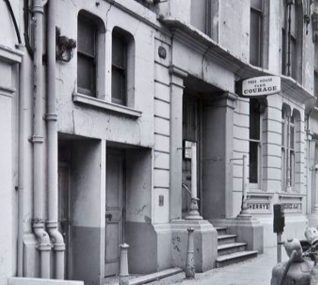 zoom
Sherry's building in Middle Street, Photographed on 8 December, 1968 - click on the photograph to open a large version in a new window
Image reproduced with kind permission of The Regency Society and The James Gray Collection

Sherry’s brings back many memories of the 1970s and early 1980s. I remember the go-go dancers and their platform soled thigh high boots and DJ Kenny Lyn spinning the discs. The evening used to be punctuated with a live band usually playing covers of classic pop songs which nobody danced to. The Sherry’s dress code was collar and tie and trousers and shoes. One night a friend without a tie took off his sock, tied a large knot in it and hung it over his collar, the doorman didn’t even notice and he was allowed entry.

The food was served in a plastic basket and eaten with plastic cutlery; the meal consisted of a few chips with questionable sausages and burgers. The entrance used to be at the rear on Middle Street, in the 1970s the queue used to reach up to The Spotted Dog pub. During the evening when you weren’t dancing, groups of friends used to walk along the balcony around the dance floor, then down the grand staircase and then pass in front of the long bar. Sherry’s being quite a big disco; the walk round needed to be done so you could see if there was anybody you might know or quite liked the look of.

My group of friends have many fond memories of Sherry’s in our teens and early twenties, probably because things were much simpler and carefree in those times. No mortgage and living at home with the parents meant we could go out 4 or 5 times a week to socialize and enjoy ourselves with friends; you would need the equivalent of a mortgage to do that nowadays. Thinking about it; that’s just for the right clothes, phone and watch without even buying a drink at the bar!