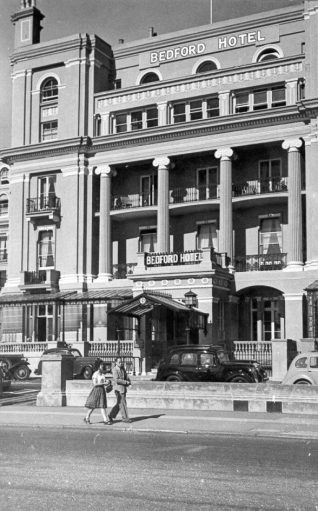 zoom
The Bedford Hotel was designed by Thomas Cooper and opened in 1835. It was considered the most distinguished late-Georgian building in Brighton after the Royal Pavilion. It had 5 storeys with 2 recessed Ionic porticoes facing south and west above the entrances, while the west wing was built back from the road and was decorated with giant pilasters. Inside was a Grecian hall with Ionic columns and a glazed dome. Guests included Charles Dickens who wrote Dombey and Son while staying there. The hotel was destroyed by fire on 1 April 1964. On 16 September 1967 a 17 storey block including a new 127 room Bedford Hotel opened on the site.
Image reproduced with kind permission from Brighton and Hove in Pictures by Brighton and Hove City Council 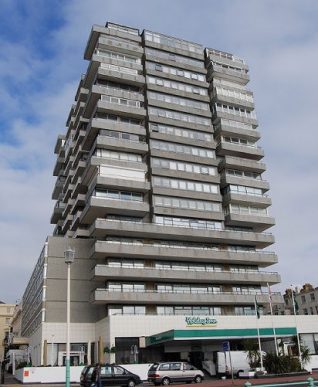 Opened on 16 September 1967 on the site of the old Bedford Hotel, it was the first major new hotel development in the town for over half a century. Designed by R.Seifert and Partners, the 17-storey block includes a 127-room hotel and the flats of Bedford Towers, and at 168 feet tall is one of four modern blocks that unfortunately dominate the western sea-front vista.

The old Bedford Hotel was opened in October 1829 for William Manfield who, in 1835, leased it to the designer, Thomas Cooper, but bought the lease back the following year and ran the hotel himself until 1844 when he leased it to Joseph Ellis. In 1855 Ellis purchased the Bedford outright, and established for it a reputation as the town’s leading hotel for the accommodation of royalty, the fashionable and the famous; the guests included Charles Dickens who wrote Dombey and Son while staying there.

The Bedford was also considered the most distinguished late-Georgian building in the town after the Royal Pavilion. It had five storeys with two recessed, Ionic porticoes facing south and west above the entrances, while the west wing, which was the first part to open, was erected back from the road and was decorated with giant pilasters. The interior had a splendid Grecian hall with Ionic columns and a glazed dome. In 1963 there was considerable debate over whether permission should be given to the owners, AVP Industries, to replace the hotel with a 14-storey block, but it proved academic as the building was destroyed by a fire on 1 April 1964 with the death of two people.

Any numerical cross-references in the text above refer to resources in the Sources and Bibliography section of the Encyclopaedia of Brighton by Tim Carder.
The following resource(s) is quoted as a general source for the information above: {2,3,46,123}

Update to the text

The hotel is now The West Pier Hilton

The Bedford was used by Graham Greene in Brighton Rock, thinly disguised as the ‘Cosmopolitan’ where it was the base for the major Brighton gang leader ‘Mr Colleoni’.