You are here: HomenextPlacesnextHotelsnextChichester Mansion 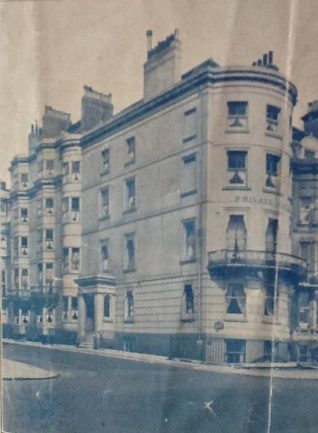 Started by my great grandmother in the late 1800’s, Chichester Mansion located at 18 Marine Parade continued to be operated by my maternal grand parents Gerald and Mattie Sims. Gerald was a commercial seaman and met and married Mattie in Australia in 1897. The hotel described as ‘Facing the the sea, opposite the Aquarium and Palace Pier, central for Trams and Buses to all parts of town.’

Bankrupted by the depression

The terms were 3 to 5 guineas per week, lunch 3s., dinner 3s. 6d., and baths 6d. each. When Mattie totalled the weekly bills, and wasn’t sure if a resident had taken a bath, she’d say “Well he should have,” and add the charge to the bill. The hotel continued until the dirty thirties, bankrupted by the depression.