You are here: HomenextPlacesnextHotelsnextOcean Hotel, SaltdeannextMemories of the glory days

Memories of the glory days

Over the decades Butlin’s Ocean Hotel provided employment, I would not say gainful, for many Saltdean residents, especially teenagers. You could earn pocket money wages, washing up and clearing tables and other odd jobs. In the summer of 1959 I left school and worked at there for a while. I remember it was hard work; the kitchens were unbearably hot, with very little fresh air. However, it was great fun and you did get the chance to use the hotel facilities including the swimming pool. This gave young chaps like me the opportunity to chat up the girls who were holidaying with their parents.

1959 will be remembered by many for its brilliant summer, noted for its longevity rather than its intensity. True there was one short spell, at the beginning of July, when the temperature climbed above 30c over a wide area. But for much of the time the heat was not extreme, and humidity levels were comfortable. The downside of this spectacular summer was the drought. However, the rains returned in early October, so water shortages were averted. 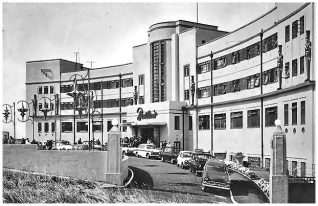 Butlin’s Saltdean in its heyday 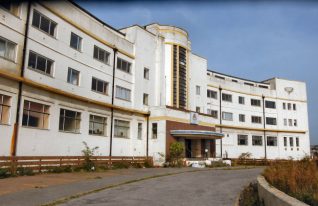 Ocean Hotel just before the developers moved in

The Ocean Hotel always had a great buzz about it, with hundreds of guests, known as campers by the staff, coming and going each week. The Redcoats were always a good laugh, brilliantly entertaining the happy campers, with lots of audience participation. Des O`Connor, Jimmy Tarbuck and other well known stars all worked at the Ocean as Redcoats in that era. I remember a Liverpudlian Redcoat called Russ Hamilton who was also a singer. In the late 1950s Russ  recorded a teen ballad called  ‘We will make love’, climbing to number two in the charts in the summer of  1957. Sadly, he never consolidated on his early success and was destined to become a one hit wonder, perhaps better known as a song writer and a Butlin Redcoat than a major pop star. Russ Hamilton passed away in 2008 aged 76 years.

Jimmy Noon is another name worthy of a mention. Jim was the resident organist at the Ocean Hotel for the best part of forty years. He was a true gentleman and a very talented musician with an extensive repertoire.  Sadly Jim passed away in 2004 he is buried in Rottingdean Church yard, a place he loved. A simple inscription on his gravestone reads  ‘Jimmy Noon Musician  1915 – 2004  Remembered with Love’. 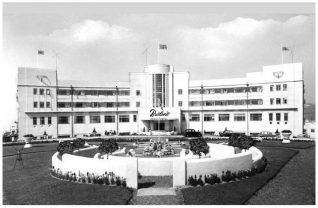 Butlin’s Ocean Hotel with a view of the gardens 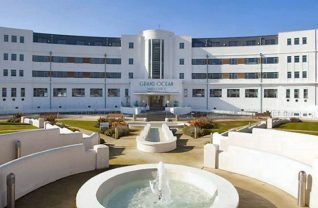 Only one Grand Hotel

In 1999 The Rank Organization who had owned The Ocean Hotel since 1972, sold the business to The Grand Hotel Group Ltd. The building was renamed The Grand Ocean Hotel until closure in 2005. Story has it that more than a few confused guests arriving at Brighton Station, would hail a taxi telling the cabbie that they were staying at The Grand Hotel. However, they would very soon be in for a shock when a rather snooty concierge informed them, there was only one ‘Grand Hotel’ in Brighton, and their accommodation was some five miles out of town at what used to be a Butlin’s holiday hotel.

The Ocean Hotel belonged to another age and as such, could never have survived in the 21st century; inevitably the whole complex was converted into flats and apartments. As part of the planning consent, vast sums of money were spent on restoring the original hotel building and gardens. However, the rest of the site was allowed to be grossly over developed.  This has distracted from the fine restoration job carried out by the developer on this listed art deco building. I wonder, if RH Jones, the Ocean Hotel’s original architect in 1938 would have approved? Nowadays the original building looks resplendent, albeit strangely silent even a little ghostly. Sadly it is no longer the beating heart of Saltdean. Billy Butlin and his famous Redcoats, are long gone, along with all the happy campers, who for over fifty years were so much part of the Saltdean scene.