You are here: HomenextPlacesnextHotelsnextOcean Hotel, SaltdeannextArt Deco hotel opened in 1938 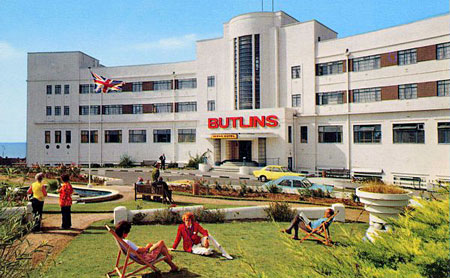 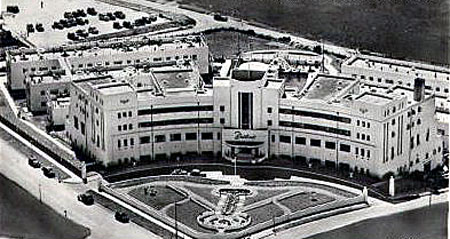 Front arial view of hotel.
From the private collection of Trevor Chepstow 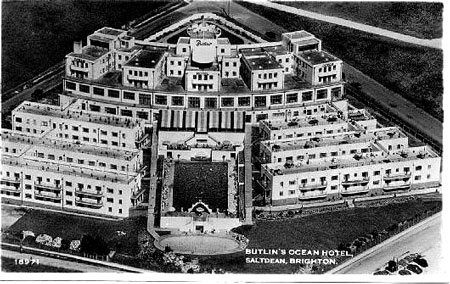 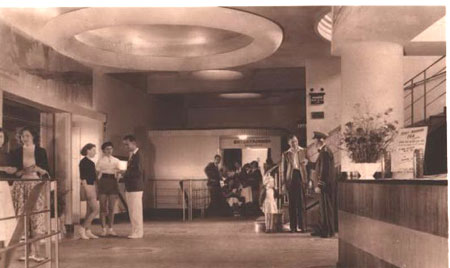 Hotel front lobby.
From the private collection of Trevor Chepstow 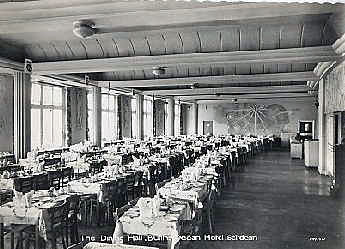 Hotel dining hall.
From the private collection of Trevor Chepstow 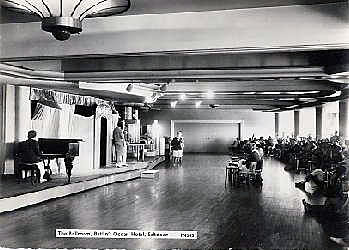 Hotel ballroom.
From the private collection of Trevor Chepstow 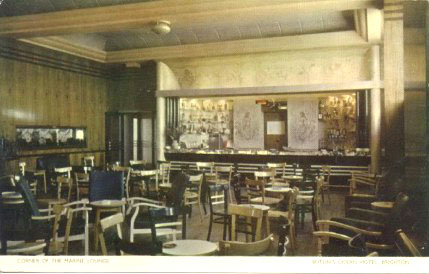 Lounge bar.
From the private collection of Trevor Chepstow 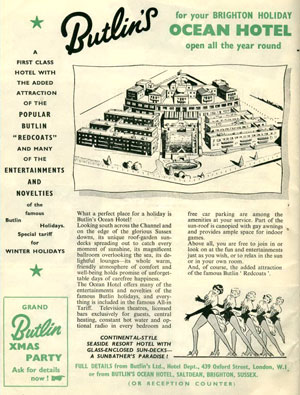 Advertising poster.
From the private collection of Trevor Chepstow

The Ocean Hotel Saltdean (often referred to as the Grand Ocean Hotel) is situated in the heart of Saltdean and has dominated the skyline of Saltdean from the thirties.  It was designed by the architect Richard Jones who also designed the nearby Saltdean Lido.   Emulating the grand designs from the Art Deco period the hotel opened in 1938.

Fine seaside architecture
A fine example of thirties seaside architecture it occupies one of most prestigious sites in Saltdean and sits in around 4 acres.  This vast hotel had 344 bedrooms and a dining hall that could seat 300 people.  From the rear of the building it commands magnificent views down to the Vale of Saltdean, including the Lido. The main building shaped like a crescent contained the whole of the public rooms and some of the bedrooms; there were a further six other buildings in the complex which contained bedrooms and bathrooms only.

Seasonal changes
The hotel was so arranged that during the winter season the six detached blocks could be closed down and the main building, with its 130 bedrooms, run as a separate hotel. A large outdoor swimming pool was one of the main features (later enclosed) and was situated between the rear buildings.

World War II use
During the war the hotel was taken over by the Auxiliary Fire Service and later became a fire service college which was officially opened by the then Home Secretary Herbert Morrison.  It was used throughout the war and was not handed back until 1952, when the lease was acquired by Billy Butlin for £250,000.  Alas the Ocean Hotel would have to wait until another year before it could operate as a holiday resort once again.

Re-opening after the war
It finally opened its doors for business in May of 1953 after an extensive refurbishment.  Six months of hard work had gone in to restoring the near-derelict building to its former glory, as luck would have it the hotel turned out to be excellent investment for Sir Billy Butlin.  With its close proximity to the bright lights and night-life of Brighton the hotel proved a very popular destination for honeymooners throughout the fifties, sixties and seventies.

Grade II listed building
Sold in July 1999 to the Grand Hotel Group the hotel remained open until January 2005. Planning permission was granted in June 2005 to convert the site into apartments. The main building, which is Grade II listed, will be refurbished with apartments upstairs and commercial/community facilities on the ground floor. The remaining buildings will be demolished and replaced by 4 new residential structures and parking.

A new lease of life?
Whilst the laughter of its past patrons may be just a memory and its heyday as a ‘Butlins’ has waned, its proudest owner, Billy Butlin, would have no problem recognizing the building in its current form.  Hopefully this unique building will remain one of the best loved landmarks of Saltdean for many years to come when it take on its new lease of life.