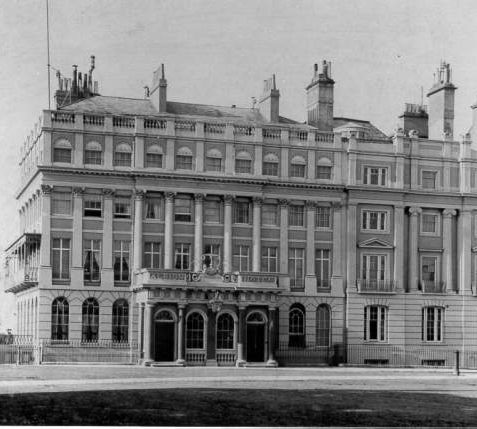 Royal Albion Hotel, Old Steine, c. 1900: The Albion Hotel opened on 5 August 1823 on the sight of Russell House. It was designed by Amon Henry Wilds and is an exceptionally elegant four-storey building with giant Corinthian pilasters and columns, shell decorations and a large Doric porch. In 1847 it became the Royal Albion and bears a royal coat of arms over the entrance. The hotel was severely damaged by fire in 1999.
Image reproduced with kind permission from Brighton and Hove in Pictures by Brighton and Hove City Council 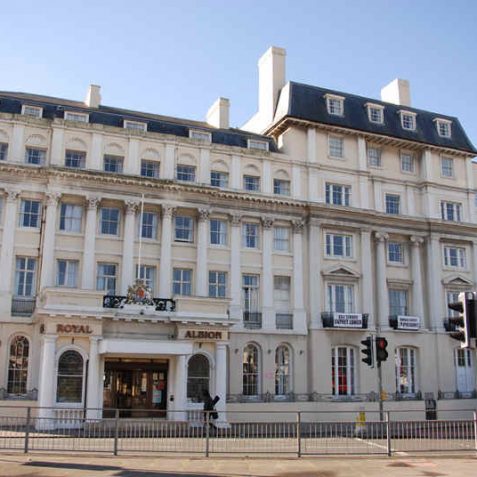 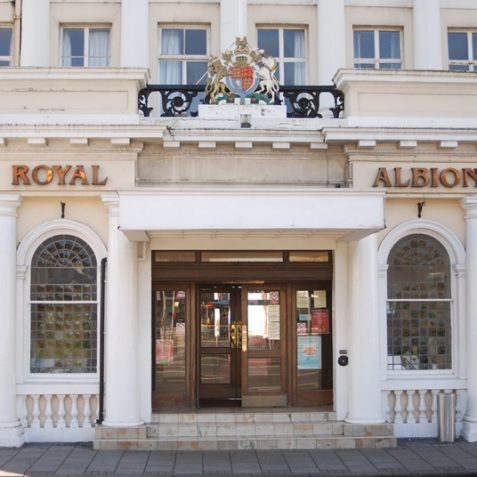 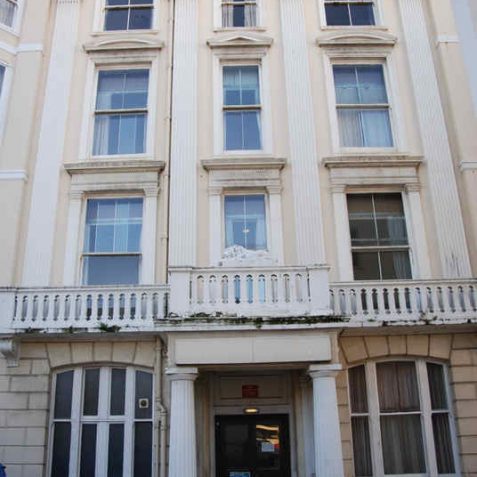 a) HISTORY: Following the demolition of Russell House in 1823 the town commissioners agreed to pay £3,000 to John Colbatch to preserve the site as an open space. However, the deal was delayed and never concluded, and so Colbatch erected the Albion Hotel on the site, opening it on 5 August 1826. Designed by A.H.Wilds, the original hotel is now the eastern wing, an exceptionally elegant four-storey building with giant Corinthian pilasters and columns, shell decorations, balconies, and a very large Doric porch. A western (now central) wing with five storeys, giant fluted Ionic columns and Doric pilasters, was added following the early success of the hotel. These two sections are now grade II*-listed buildings.
The Albion became ‘Royal’ in about 1847 and bears the royal arms over the entrance, but by 1900 it was in a very dilapidated condition and closed down. In 1913 it was purchased for £13,500 by the charismatic Harry Preston , the proprietor of the nearby Royal York. He restored both the fabric and the fortunes of the Royal Albion Hotel, and it became the haunt of many of the famous figures of the day, especially in art, literature, sport, and entertainment; Arnold Bennett wrote Clayhanger while staying there in 1910. The 115-bedroom Royal Albion was sold for £575,000 in 1978 and again in 1987; it has now taken in the entire Grand Junction Road frontage.

b) ALBION ROOMS: The Albion Rooms in the south-western wing of the hotel were originally designed as a bazaar, but they were converted into reading and lecture rooms when this venture failed. From 1841 until 1869 the rooms were a centre of the town’s cultural life, playing host to the Royal Literary and Scientific Institution. Founded by John Cordy Burrows and Henry Turrell, two members of the older Brighton General Library, Literary and Scientific Institution, the society went from strength to strength with Prince Albert as patron, promoting the laudable aim of establishing a free public library in the town. A number of historical and artistic artifacts were collected as well as a fine library of books, with funds raised at scientific soires at the Royal Pavilion . After a number of years though, these evenings lost their popularity and the institution fell heavily into debt. It was forced to close in 1869, but the collections were presented to the corporation to form the basis of the public library which had always been the principal aim of the institution.

c) LION MANSION: The present western wing of the Royal Albion was built in 1856 on the site of Williams’s Baths as the Lion Mansion Hotel. Now included on the council’s local list of buildings of special interest, it has an entrance on the northern side with a Doric porch surmounted by a large lion, while the facade is decorated with four giant, fluted, Corinthian pilasters. The sea-front facade has a Doric porch with two lions, and bears a plaque in memory of William Gladstone who often stayed at the Lion Mansion. It was also known as the Adelphi before being absorbed by the Royal Albion in about 1963.