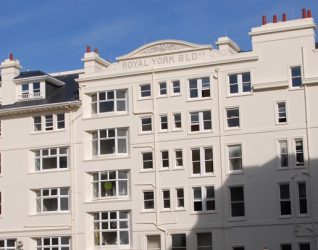 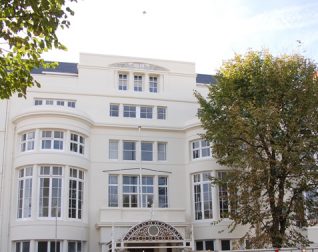 This site was originally occupied by the so-called ‘manor house’ of Brighton, a red-brick building with a slate roof which was known as Steine House and was probably erected in the first half of the eighteenth century. From 1771 it was the home of Richard Scrase, the joint lord of the manor, but in 1801 it was purchased by a Dr Hall who built three houses on the adjoining stables. In 1819 the three houses, known collectively as Steine Place, were converted into the Royal York Hotel which opened on 27 September under the managership of Charles Shepherd, ex-proprietor of the Star and Garter.
The new hotel was named after the Duke of York, brother of the Prince Regent, and was the first of the new large-scale hotels in Brighton. It had one hundred beds, and following the demise of the Castle Inn became the most fashionable venue in the town with concerts and recitals given in the public rooms; the first Tradesmen’s Ball was held there in 1823. In 1827 Harry Pegg became manager, and the hotel was enlarged by taking in the two houses to the west and the house to the east, forming the building as seen today. The manor house was probably demolished at this time.
Many famous visitors stayed at the Royal York, including the Duke and Duchess of Clarence in October 1829, and Benjamin Disraeli in 1840; in 1861 Charles Dickens read David Copperfield to an attentive audience. However the hotel was not able to retain its popularity, and by the end of the century it was almost derelict. In 1901 the building was purchased by the flamboyant Harry Preston who did so much to revitalise Brighton in the early twentieth century and was later knighted. He restored both the building and its reputation, and the Royal York once again became the most fashionable hotel in the town. Following Preston’s retirement in 1929 the corporation bought the building for £32,500 and converted it into offices known as Royal York Buildings which now include the town’s registry office.
The listed building has four storeys, wide bows, and a large Doric porch with wrought-iron canopy; it also bears the date 1819. The west wing can clearly be seen to have once been separate houses, as can the east wing which has three bows. The southern facade in Pool Valley is plain and now houses the coach station which was opened in 1929, but the name ‘Royal York Hotel’ may still be seen on the southern wall below the royal arms, although it has been altered to ‘Royal York Buildings’.