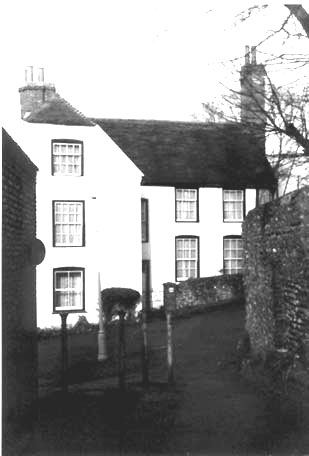 Kemps is the oldest habitable dwelling in the Old Village, built in 1540 by Edward Blaker for his family. The local records show the house being occupied by descendents of Edward Blaker until 1869. Between 1869 and 1906, the records of who lived here are yet to be uncovered. The house was occupied in 1906 by J.W.Hylands a “dealer in horses”. During the nineteenth century at least three houses in the area were occupied by the Blakers.

Flint built
The house is of flint construction with brick quoins. The walls to the front of the property have been stuccoed. The walls to the west side and the rear are flint knapped. The large chimney in the West wing has a spiral staircase wrapped around it. The original leadlight windows with glazing bars have been replaced during the nineteenth century with typical sash windows.

Tales about the house
There are local tales about the house. There is little evidence to support the tales so far, but they are worth retelling. The attic room was used by the first protestants in the area, probably Quakers as a Meeting Room during the reign of Henry VIII. The land which the house is built on was sold to Edward Blaker.

There are rumoured to be many passageways and underground tunnels from Kemps to the other buildings in the area, such as the Old Manor and Hangleton Manor. Evidence has been found of a passageway under the road to support this, but from the internal structure as it is today, it is unclear where these passageways could have been. We know that chalk can be easily tunnelled, as it is soft when dug and then hardens, which does add more credibility to this tale.