You are here: HomenextTopicsnextCelebrations and eventsnextA bonfire as big as a house

A bonfire as big as a house

During the 1940s and 1950s the people of Moulsecoomb had a hard time scraping enough money together to feed and clothe the family. There was no surplus for extras and certainly not for something that went up in smoke like fireworks. 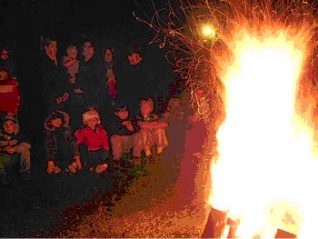 A bonfire as big as a house

Sharing a packet of ‘sparklers’
As a child of that time, if you were lucky you might be treated to a packet of sparklers, and you only got one, the whole packet was shared. I remember a special treat one year, a ‘Catherine wheel’ that didn’t go round, just fizzed on its nail. A ‘Jumping jack’ that didn’t jump and a ‘Golden rain’ which was lovely. That was it where fireworks were concerned, except for the bangers the local boys obtained from the pennies they earned displaying the Guy Fawkes dummy they had made.

Hot Potatoes
Bonfires though, we knew all about those. All houses in Moulsecoomb had gardens and where there were children, usually a bonfire was built. Those who had made them put their Guy Fawkes on top and we all stood round in our coats hats and woolly gloves, watching the yellow flames turn to blue and red. As the wood started to settle, potatoes were thrust into the hot ashes to cook. Then it was the time to visit everyone else’s bonfire to see if they were as good as yours. On return to your own garden it was time to roll your hopefully cooked potato out of the fire. Even if not fully cooked this sumptuous meal was always enjoyed.

A communal bonfire
Where Halland and Ashurst Roads joined was a large green. One year an enormous bonfire was built.  As a small child it seemed to me to be as high as a house. The warmth generated by the fire and companions was grand. Poor we might have been but we still enjoyed ourselves.