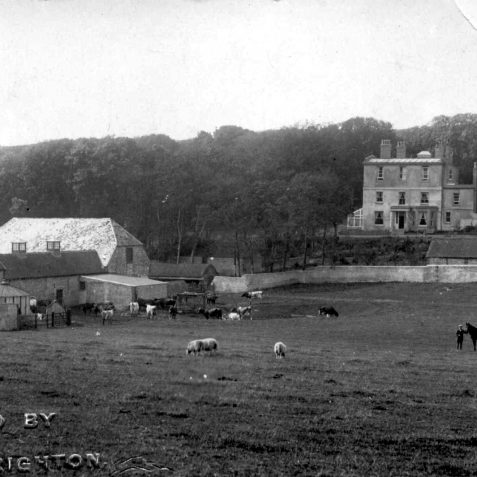 Woodingdean House with the buildings of Woodingdean Farm in the foreground c.1900.
From the private collection of Jennifer Drury 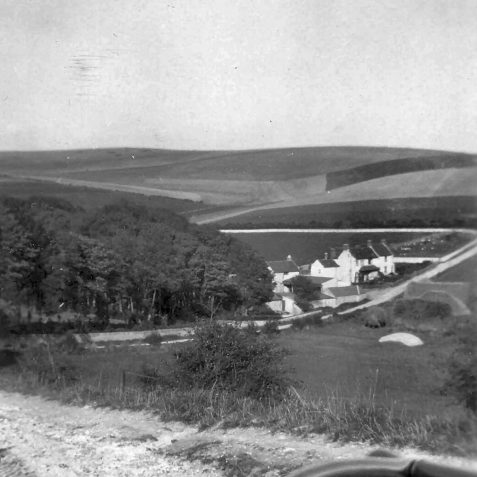 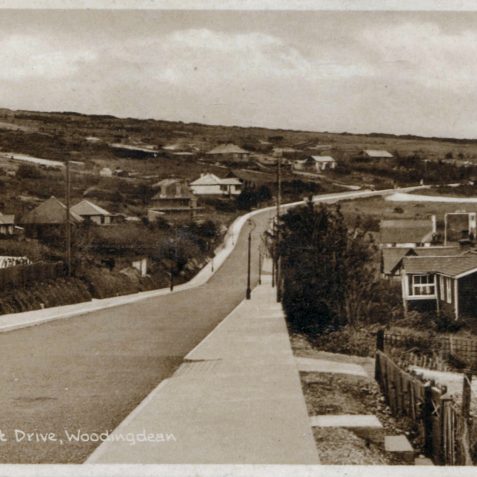 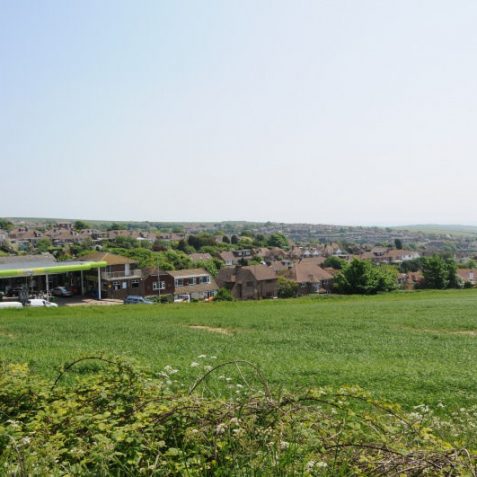 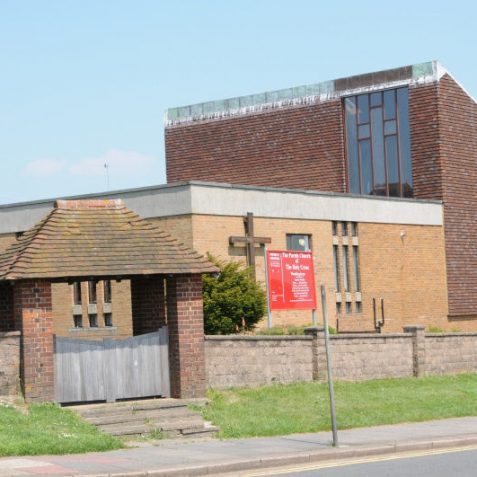 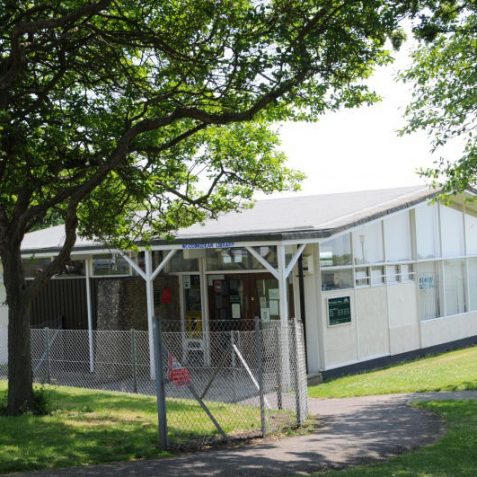 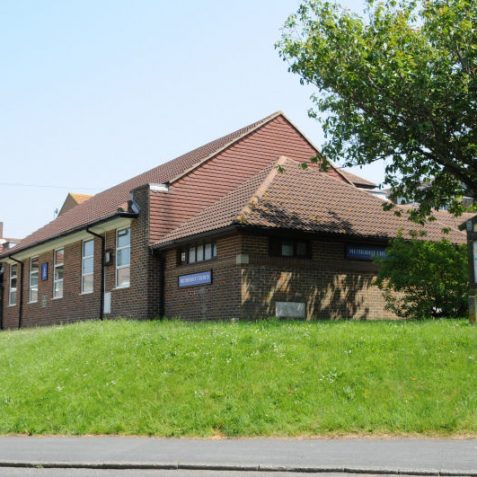 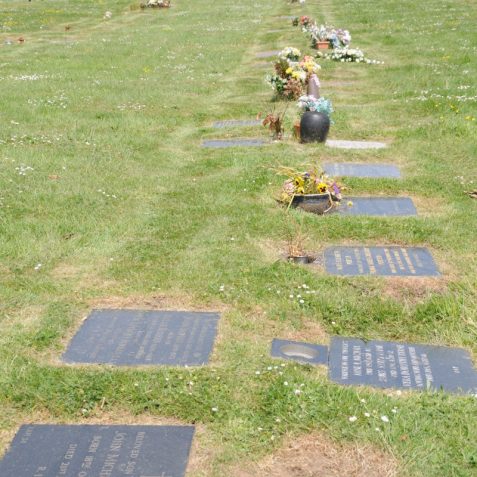 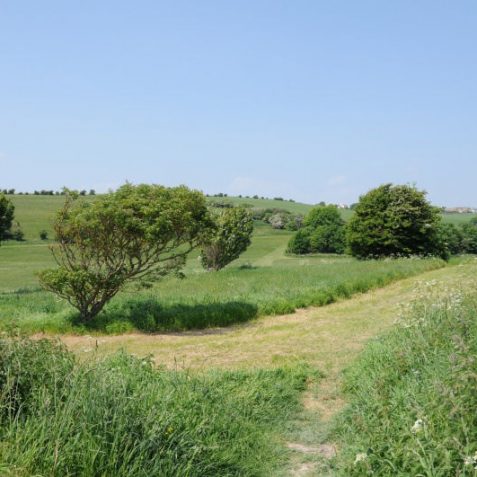 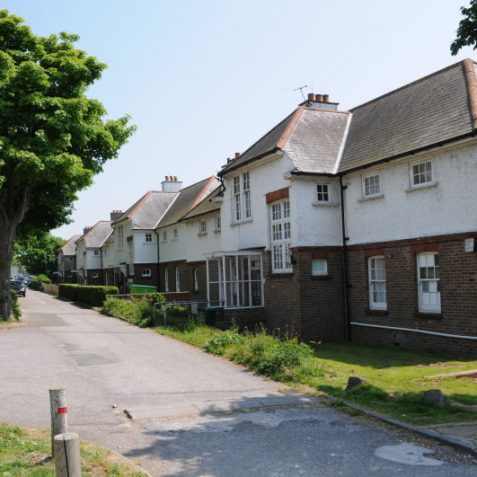 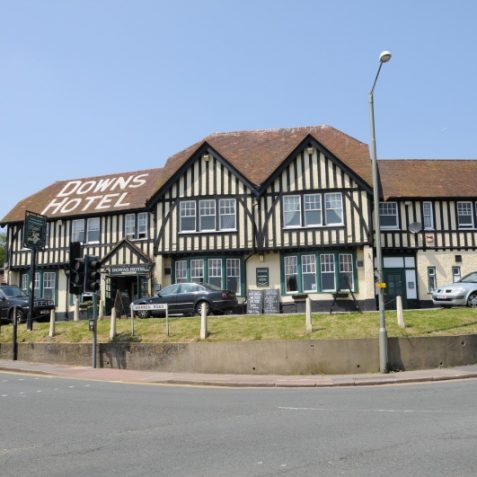 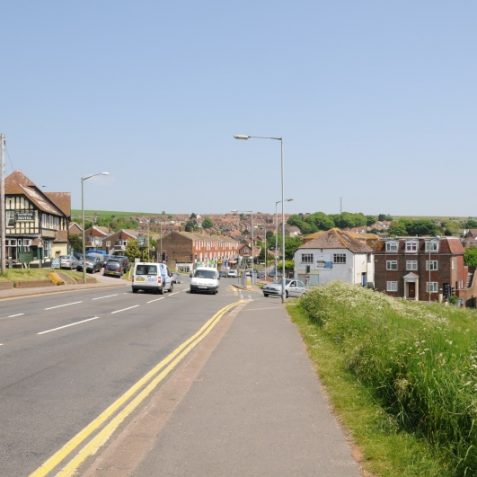 a) HISTORY AND BUILDINGS: The original Woodingdean House stood on the northern side of Ovingdean Road from at least the late eighteenth century until the 1950s when it was replaced by the houses of Ovingdean Close, but several flint cottages and outbuildings of the farm remain which were converted in 1985-6 into housing known rather anonymously as Meadow Vale. {83,108,109,123}
The Woodingdean housing estate, known as the Downs Estate until about 1927, occupies an area to the north-east of the old farm. Prior to the 1920s the Warren Farm Schools (see below) and Wick Farm in Falmer Road (recorded in 1296 {289}), together with a few isolated houses and barns, were the only buildings in the area, but from the mid ’20s plots were sold piecemeal and developed with shacks, bungalows and detached houses. The farm and estate were located in the Balsdean chapelry of Rottingdean parish.
When the area became part of Brighton county borough on 1 April 1928, local services and planning regulation improved and brought about a rapid increase in building. That part of the estate to the north of Warren Road on Wick Farm land was completed in the 1930s, but piecemeal development to the east of Falmer Road continued into the ’60s. The corporation also developed housing estates, at South Woodingdean in the early ’50s and the North Woodingdean estate later in the decade, such that the population of the district is now something just over 10,000. Woodingdean industrial estate opened from 1961. {83,108,277}
The Church of the Holy Cross, Warren Road, is a single-storey building in yellow brick which was erected in 1968 on the site of a simple structure completed in 1941. A second Anglican chapel, the Church of the Resurrection, was designed by John Wells-Thorpe and dedicated on 15 June 1959. However, it was later taken over by the Roman Catholic Church and is now St Patrick’s R.C.Church, Broad Green. Woodingdean Methodist Church, The Ridgway, dates from 1953 but was greatly extended in 1986. The Downs Free Church, Downsway, was built in about 1932 with a more recent extension at the rear. {83,123,311}
Woodingdean Library first opened at 48 Warren Road on 2 May 1940 and moved to the Warren Farm School building in about 1952. The permanent library was opened on 10 July 1959 by the mayor, Ernest Kippin. The swimming-pool at the adjacent school opened in 1977. Central Woodingdean Park covers 5.7 acres off Lockwood Crescent and was grassed in 1970, with the bowling-green and tennis-courts following in 1972-3, and the pavilion and car-park in 1974. The Happy Valley Park in Falmer Road has 11.37 acres of woods and playing fields which were levelled in the 1950s and ’60s. {123,124,126}
Part of the land of Warren Farm was later used for the Lawn Memorial Park, developed in 1962 on 9.5 acres off Warren Road. The gravestones are laid flat to preserve the external appearance as a park and to allow for easy mowing. Opened on 1 January 1963, this is now the principal cemetery in Brighton for new burials. It includes 311 interments removed from the Quaker’s burial ground in Rifle Butt Road in 1972. {126}
Laughton Road , on the north-eastern edge of the estate, is the highest road in Brighton at 575 feet above sea-level; 13-15 Laughton Road are the highest houses. Falmer Road is the borough’s highest main road at 535 feet, and also has the highest numbered house, no.576. {83,109}