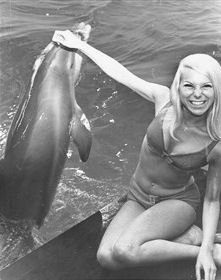 zoom
Dolphins 1968/69
From the private collection of Denise Taylor (Wixey). Reproduced with kind permission of The Argus 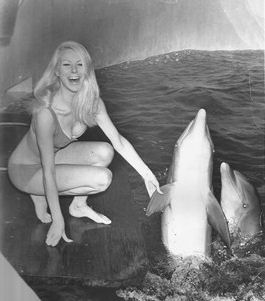 zoom
Dolphins 1968/69
From the private collection of Denise Taylor (Wixey). Reproduced with kind permission of The Argus

Many years ago my father, Dennis Wixey, was Chief Photographer with The Evening Argus, and I was often called upon to assist with local news  stories. The photographs here were taken in 1968/69 when the dolphin pool had newly opened, just before a new larger pool was built. I believe the dolphins names were “Prinny” and “Belle” Initially the dolphins were contained in a high sided pool which seemed very small for their size and speed.

Released back into the wild

I ‘swam’ with the dolphins, holding onto their fins as they swam by. I was told at the time that they had been brought to this country by an American trainer, who had accompanied them from Miami. Between 1982/3 there were extensive renovations to the pool and the Dolphinarium was a successful venture, but eventually a consortium of animal rights groups began a project to release the last remaining dolphins “Missy” and “Silver” back into the wild. They were released in 1991 off the Caribbean island of West Caicos.

I am pleased that I was around to see this brief moment in Brighton’s past, but more delighted that these memories can be relegated to that particular time in history. Now the well-being of dolphins is seen to come above and beyond a commercial undertaking.