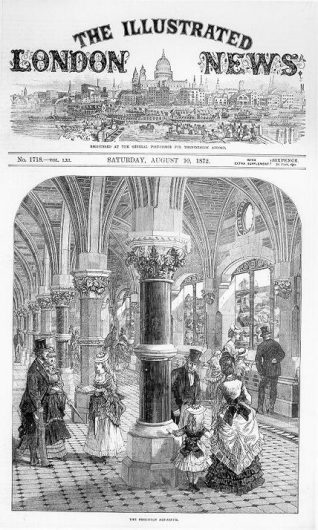 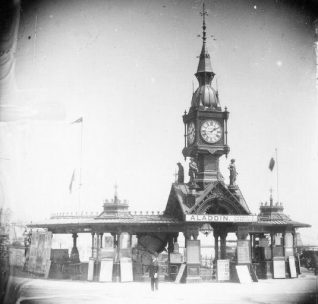 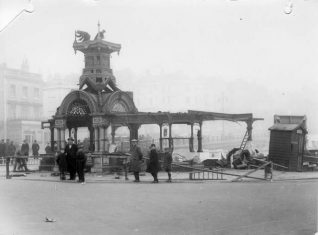 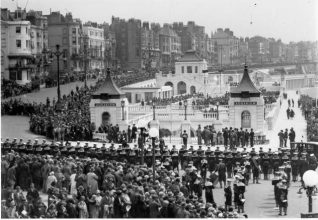 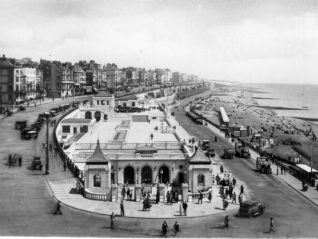 Note that this text is an extract from a reference work written in 1990. Some of the information may therefore be out of date.

a) ORIGIN: Brighton Aquarium was the brainchild of Eugenius Birch, the famous pier engineer and designer of Brighton’s West Pier, who conceived the idea following a visit to Boulogne Aquarium. Erected on the approach roadway to the Chain Pier, the Aquarium necessitated the construction of a new sea-wall and promenade, the Madeira Road, which was commenced in 1869. The whole project was completed in 1872 at a cost of £130,000, and the Aquarium was inaugurated by Prince Arthur at Easter although there were no exhibits at the time. It was formally opened to the public on 10 August 1872 by the mayor, Cordy Burrows.

b) DESCRIPTION: The new Italianate building extended for about 700 feet along the base of the cliff. The entrance was at the western end, on the site of the Chain Pier’s toll-house, where a wide flight of steps descended into a large courtyard formed by five red-brick arches and terracotta columns. Inside the building a large entrance hall led into the main aquarium corridor, 224 feet long and lined with large tanks lit from behind to add to the air of mystery. This impressive corridor, with its vaulted ceiling supported by columns of granite and marble decorated with marine capitals, remains the main aquarium hall and is now listed as being of special architectural and historic interest. The visitor then entered a central hall, now the Dolphin Lounge, which housed a hundred-foot tank to Birch’s unique design; holding 110,000 gallons, it was the largest display tank in the world at that time. Marine exhibits were not the only attraction however, as a reading room, restaurant and a conservatory with fernery, rockery and cascade were also provided.
The roof terrace was completed in the summer of 1874 and a distinctive clock tower, gateway and toll-houses were added by T.Boxall in the October of that year. In June 1876 the terrace was extended by 180 feet and a roller-skating rink, terrace garden, smoking room, caf..e/. and music conservatory were all added on the roof.

c) NINETEENTH-CENTURY DEVELOPMENTS: The Aquarium proved to be an instant success with the town’s fashionable society and received many royal visitors. Among the early attractions was a large octopus, and in 1877 the first sea-lions arrived; the exhibition of a live Norway lobster in 1874 caused a furore! By 1880 organ recitals were being given twice daily in the hall, while concerts under the direction of William Kuhe were performed in the conservatory. In 1883 lectures and exhibitions were introduced to further stimulate public interest, and in 1889 a dramatic licence for the production of plays was obtained.

d) CORPORATION PURCHASE: The initial success was not sustained however, and by the turn of the century the Aquarium was in financial difficulty. In October 1901 the building and business were purchased by the corporation for just £30,000, and Brighton Aquarium was henceforth managed as a municipal enterprise, apart from a brief private letting in 1905 and 1906. The Aquarium’s popularity then rose again as Brighton’s fortunes in general revived. From 1907 until 1918 a municipal orchestra played in the conservatory which was renamed the Winter Garden. There were also occasional film shows from before 1900, and in the First World War the Winter Garden was briefly known as the Aquarium Kinema; film shows continued until 1939. {68,68a}
In July 1922 Brighton Council gave the Southdown bus company permission to convert the building into a bus and coach station, but the plan was unexpectedly withdrawn at a public inquiry.

e) RECONSTRUCTION and POST-WAR DEVELOPMENTS: In 1927 the Aquarium closed for a £117,000 modernisation to the plans of borough engineer David Edwards. When it was reopened by the Duke of York on 12 June 1929, the exterior had been rebuilt in white Empire stonework, the entrance was replaced by two square kiosks with pagoda-style roofs, and the distinctive clock tower had been demolished. A new entrance hall had been built with an adjoining restaurant, while the Winter Garden had been transformed into the Prince’s Hall, a modern concert hall seating some 1,250 people. A ballroom, bandstand and other small buildings were added to the Sun Terrace which was extended eastwards above a colonnade and shops to meet the Madeira Terrace. A lift was also installed from Marine Parade down into the Aquarium, while the subway to the Lower Esplanade was opened in 1935. Both slipper and shower baths, which closed in about 1979, and a miniature rifle-range were also provided.
During the war the Aquarium was requisitioned by the RAF. When it reopened, chimpanzee tea-parties and other small animal attractions were introduced, but in 1955 the building was privately leased again, to Aquarium Entertainments Ltd. The Prince’s Hall, which had been used nightly as a ballroom, later became the Florida Rooms night-club but was transformed in 1961 into the Montagu Motor Museum.
The first pair of dolphins were exhibited in a pool at the western end of the Aquarium in 1968 and proved so popular that the motor museum was converted into a permanent dolphin attraction. Opening at Easter 1969, the dolphinarium has seating for a thousand visitors around an oval pool holding 210,000 gallons of sea-water. However, serious concern about the effect of permanent enclosure on these intelligent mammals has led to a considerable movement to close the dolphinarium and, to a lesser extent, the whole aquarium.
Pirates Deep, an indoor adventure playcentre for children, has opened in another part of the building while the most recent addition is the shark pool of April 1987. The Sun Terrace has been converted into a popular small-scale funfair and amusement centre, Holiday World.