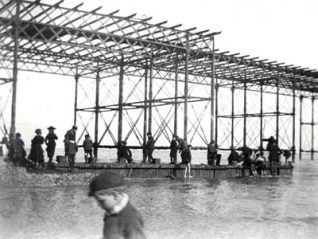 zoom
Image shows the substructure of the Palace Pier being erected, c1893
Image from the 1994 My Brighton museum exhibit

Construction
In 1889 the Brighton Marine Palace and Pier Company was formed to erect a new pleasure pier opposite the Old Steine, conditional upon the removal of the old Chain Pier which had been purchased for £15,000. Designed by R.St George Moore, the first screw-pile of the new Palace Pier was driven in November 1891, but progress was slow. The destruction of the Chain Pier in a storm in December 1896 avoided the need for its demolition, but the wreckage damaged not only the new adjacent structure but also both the West Pier and Volk’s Railway. The consequent claims on the company for damages threatened it with liquidation, but in 1898 Sir John Howard formed a new company which purchased and then completed the Palace Pier, opening it to the public on 20 May 1899. The entrance was an illuminated archway but beyond it only the decking, adorned with delicate filigree arches, and some kiosks were initially opened. The new pier proved an instant success.

Development
The first phase of the new pier was completed at a cost of £137,000 on 9 April 1901 with the opening of the landing stage and the pier-head pavilion, the actual marine palace referred to in the name of the company; the latter, decorated in oriental style with four large minaret towers, contained dining, smoking and reading rooms, and also a concert hall. In 1906 the central windscreen was erected, and further improvements were made in 1910-11 when the pavilion was remodelled as a theatre and café, a bandstand was added in the centre of the pier, and the large winter garden was erected near the shore end.

A new entrance in 1930
In 1930 a new entrance and clock tower replaced the three ironwork arches of the original entrance, an improvement which was inaugurated on 27 June 1930 by the mayor, Horace Aldrich, in conjunction with a widening of the promenade. The pier was extended slightly in 1938 when a ‘big wheel’ ride was added at the pier-head, but it was closed throughout the war and a gap was made near the middle to prevent its possible use as a landing stage by the enemy. The pier was also damaged by German bombs.

Reopened after WWII in 1946
The Palace Pier reopened in the summer of 1946 and business boomed. Day-trips along the coast were operated until about 1960, a repertory company performed at the theatre until 1964, and many other attractions were introduced. However, on 19 October 1973 a seventy-ton barge, which was moored to the pier during the demolition of the derelict landing stage, broke loose during a gale and severely damaged the structure; the theatre partly collapsed and was never used again, and part of the decking was also wrecked. A replacement helter-skelter was installed the following year, but restoration of the damage was not completed until February 1976.

Bought by Noble Organisation in 1984
In 1984 the pier was purchased by the Noble Organisation which has revitalised it by introducing free admission and new attractions. Two years later, the new owners embarked upon an £8 million refurbishment and enlargement programme which will include the reconstruction of the pier-head theatre. The latter was demolished in March 1986, but will be replaced by a facsimile complete with colonnade, oriental domes and many of the original fittings; in the interim period it has been replaced by a large amusement dome. The refurbishment of the pier has included new entrance kiosks, a remodelling of the Palace of Fun, and the provision of the stylish Fish and Chip Café, Victoria’s Bar and Horatio’s Bar.

Description
The Palace Pier is generally acknowledged to be the finest pleasure pier ever built, and is also a grade II*-listed building. The peak of its popularity came in 1939 when there were two million visitors, including 45,000 on just one Bank Holiday, but it remains popular with both visitors and locals encouraged by free admission and deckchairs, and a host of new attractions.

Many original features
The pier retains many original features, with the refurbishment programme adding to the facilities offered. Oriental in design, the Palace Pier now has a length of about 1,650 feet, and a width which varies from 45 feet to 189 feet at the pier-head.

Two original kiosks
The entrance is flanked by two original kiosks, while two more kiosks with fish-scale roofs, originally erected at the entrance to the Chain Pier in 1872, stand either side of the former winter garden, now the Palace of Fun amusement arcade; the latter retains its fine ironwork interior, domed roof, and has many stained glass windows. Two sets of iron filigree arches remain before the circular bandstand is reached, now the Fish and Chip Café and Victoria’s Bar.

A canon from the Chain Pier
Near the pier-head stands a signal cannon also from the Chain Pier. The original pier-head theatre has been demolished, and the area is now occupied by a large slot-machine dome and a number of funfair rides, but the shops and bar on the eastern side retain their original minarets. A number of other original square kiosks still remain along the length of the pier, mostly marked with the initials ‘BMPP’ for ‘Brighton Marine Palace and Pier’, as the pier is still officially known.