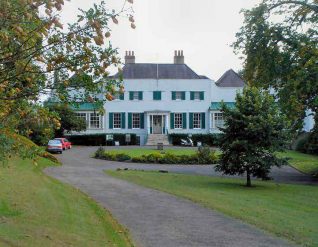 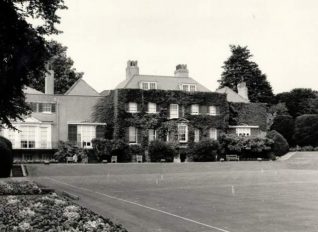 The heart of Preston is the village, centred around North Road, Middle Road, South Road and Preston Road. The Preston Village conservation area also includes Preston Park and much of Preston Road, which have their own entries.

a) PRESTON MANOR : The present manor house dates largely from the eighteenth and twentieth centuries, but its origins date back to at least the thirteenth as there are the remains of a two-roomed building of that date in the basement, with two doorways from the sixteenth century. In 1738 Thomas Western had the house rebuilt above the main floor of the medieval house and small pavilions erected to flank the main block, but little now remains of the new eighteenth-century interior. The house took its present form in 1905 when Charles Peach was engaged to enlarge it; he added a dining room and a servants’ wing, widened the entrance hall, and built the verandah along the north front.
As part of the manorial property, the house belonged to the bishops of Chichester until 1559 when it reverted to the crown. In 1628 the manor was leased to the Shirley family, and it then passed to the Western family in 1705. In 1794 they sold it to William Stanford, and the manor then continued in this family until the house and grounds were bequeathed to the corporation by Sir Charles and Lady Ellen Thomas-Stanford on their deaths in 1932. The house has been restored to its Edwardian heyday, and furnished with many period pieces and collections from the seventeenth, eighteenth and nineteenth centuries. Opening to the public as the Thomas-StanfordMuseum in 1933, Preston Manor currently attracts some 8,000 visitors annually. Particularly impressive is the Cleves Room, lined with gilt leather which is said to have been associated with Anne of Cleves. The servants’ quarters and the ‘below-stairs’ areas, the kitchen and laundry, have also been restored and opened to the public.
A croquet lawn on the park side of the house stands adjacent to the walled garden, which has flint walls dating back to the eighteenth century and a pets’ cemetery in the south-western corner. To the east of the house stands an old well-house in knapped flint which is unfortunately in a very poor condition. It dates from the 1730s and once housed an iron horse-pump and capstan. The house, garden walls, and well-house are all listed buildings, and the grounds have been designated as a garden of historic interest by English Heritage. {15,44,149}
For many years the manor house was haunted by a blonde woman dressed in white; several guests complained of unexplained happenings, and a disembodied hand was seen in the north-west bedroom. In November 1896 the spectre told a seance that she was a nun who had been wrongly expelled from the church in 1535, and that she was buried outside the house in unhallowed ground. A short time later some workmen who were clearing drains under the south terrace discovered the twisted skeleton of a woman of about fifty years of age, anything up to 400 years old. It was reburied at the edge of the churchyard, secretly after the vicar had refused on the grounds that she was a Catholic, and the ghost was not seen again. {150}