History of the Indian Gate 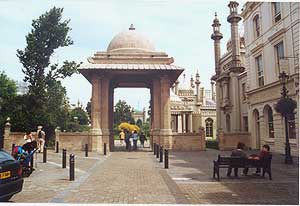 Commemoration of care
This memorial exists to commemorate the Indian soldiers that passed through Brighton and Hove hospitals during the First World War (1914 – 1918). The gateway to the Pavilion from the south was a gift from the people of India to those of Brighton and Hove, as a thank you for caring for her wounded soldiers.

The inscription on the gateway reads: “This gateway is the gift of India in commemoration of her sons who – stricken in the Great War – were tended in the Pavilion in 1914 and 1915. Dedicated to the use of the inhabitants of the Brighton, B.N. Southall, Mayor.”

“Doctor Brighton”
On Wednesday 26 October, 1921 his Highness the Maharaja of Patiala accepted an invitation to perform the ceremony of unveiling and dedicating the new gateway and presenting it to the Corporation of Brighton for the use of its inhabitants. In return the Mayor presented the Maharaja with a gold key, which was a copy of the original key to the Royal Pavilion.

In response to the presentation, the Maharaja declared that from many of those who had returned to India, he had heard expressions of fervent gratitude for the attention and care lavished upon them by “Doctor Brighton”. The fame of the skill of this ‘medic’ as a healer and health restorer had spread to many hundreds of remote Indian villages.