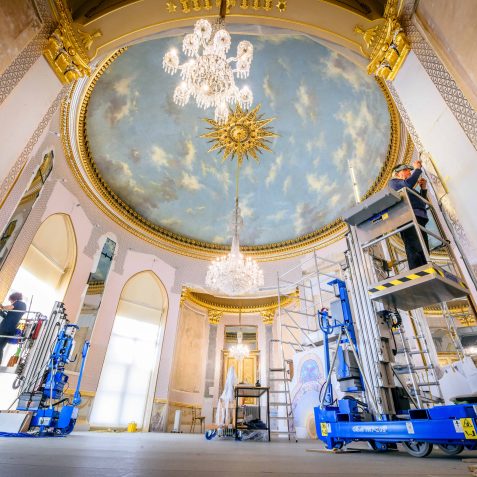 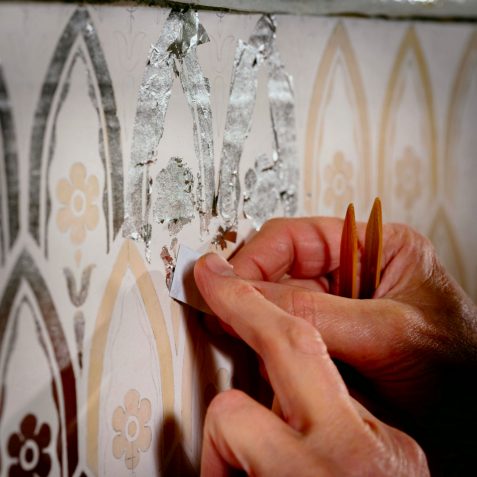 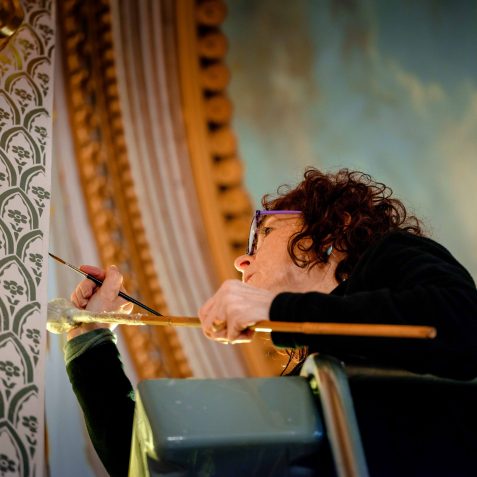 A labour of love

Ann Sowden, who worked for thirty-two years at the  Royal Pavilion as a conservator, described her mammoth task replicating decorator Robert Jones’ hand painted wall decoration of the Saloon, as a ‘labour of love’. Her first task was to apply by hand, 12,000  motifs on the walls of the room —this took a staggering two years. She needed to set out the motifs on the walls to ensure they looked uniform and straight. As the walls are different sizes and far from even, this was an extremely difficult challenge. It took three months of complex working with lasers, string and paper rolls from cash tills to ensure the motifs were geometrically accurate.

The next stage in the process involved Ann and a team of two other members of Royal Pavilion staff, painstakingly applying each motif with platinum leaf. Silver was not used because of its propensity to tarnish; the final stage included painting a shadow for each motif. The work often involved ten hour days spent on a mobile scaffolding to enable the team to reach the ceiling.

Conservator  Ann Sowden said “As the third stateroom in the Royal Pavilion, together with the Music Room and Banqueting Room, the Saloon is a very important room. It has never been seen in living memory the way it should be. I imagine when George IV was here during the summer, guests would have entered through the windows which overlook the Old Steine; the magnificent Saloon was the first room people would have seen in the Pavilion.”