'What the Butler saw' 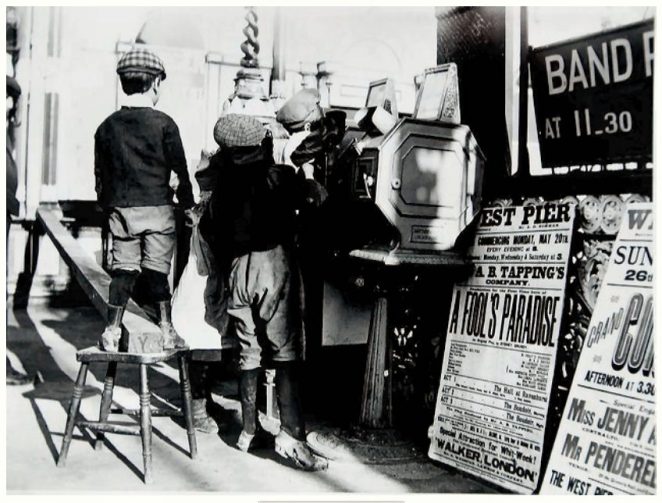 Schoolboys looking at the naughty photos 1901

The young chaps in the photograph, enjoying a ‘What the Butler saw’ show on the West Pier in 1901 were using a Mutoscope. This was an early motion picture device patented by Herman Casler in 1894. It worked on the same principle as a ‘flip book’ which contained individual images that appeared to move when you ‘flipped’ the pages. The Mutoscope had individual image frames of silver based photographic prints attached to a circular core – a bit like a huge Rolodex. A typical reel held approximately 850 images and was viewed through a single lens; the machine was hand cranked by the person viewing.

A popular end of the pier amusement 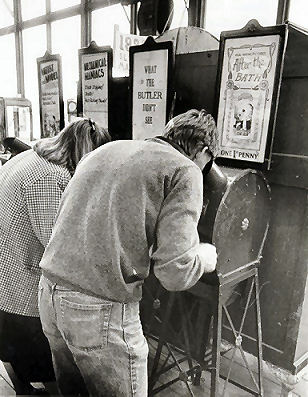 Mutoscopes were a popular feature of amusement arcades and pleasure piers in the UK until the introduction of decimal coinage in 1971, made the mechanisms difficult to convert, and many were subsequently destroyed. The typical arcade installation included multiple machines offering a mixture of fare. Both in the early days and during the revival, that mixture usually included ‘girlie’ reels which ran the gamut from risqué to outright soft-core pornography. It was, however, common for these reels to have suggestive titles that implied more than the reel actually delivered.

Do you remember them?

Do you remember enjoying the ‘What the Butler saw’ type of machines on the West Pier, or even the Palace Pier. What did you see? Did you think they were naughty? Let us know by posting a comment below.