You are here: HomenextPlacesnextMarketsnextOpen MarketnextMemories of the farrier at Dawkins Forge

Memories of the farrier at Dawkins Forge 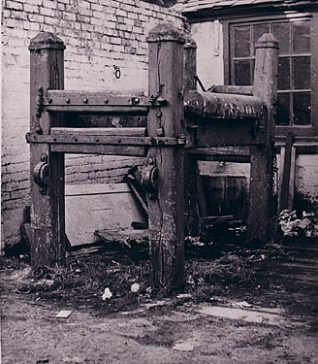 “When I was a child in the 1950’s, the Open Market was largely a series of stalls with corrugated iron roofs, otherwise open to the elements.

I also remember the blacksmith’s forge on the London Road side of the market, where my brother and I would watch horses being shoed, with loud hammering on the anvil and accompanying smoke and steam. A wonderful sight that would keep us enthralled while our mum did the shopping!”

The smell-memory of Dawkins Forge
“Aah! the ‘smell-memory’ of Dawkins Forge as he pressed the hot shoe onto the hard pad of the horses foot! The only bit of the forge remaining is (or was recently) a large iron ring that the horses were tied to. It is set in the flint wall, behind all the fruit shop clutter, on the west side of the greengrocers at the London Road side of the market.”

Geoffrey Mead
Submitted to the website by e-mail, September 10, 2002

As children, my sister and I were allowed to stand outside his workshop (where Mears the greengrocers shop is now) and watch the Farrier shoe the horses. There would be a small circle of adults and some children standing in a group as the big horses were stood to be shoed.

It was fascinating to watch the precision of this craftsman. First he eased off the shoe, cleaned and evened off the surface of the hoof with his tools. These were large working delivery horses, and he would fix their great feathery hoofs on his thick leather apron between his knees. Those horses knew and trusted him and rarely made a fuss. Then he would go into the black bowel of his workshop and come out with a possible suitably sized horseshoe. Next he would lift the hoof and try the new shoe for size, and then put it on a long rod into the blazing furnace. The most exciting part for us kids was when the new shoe was sufficiently translucent he would carefully lift the hoof and try the new shoe for size. I can still smell the momentary burning hoof as he checked out the new shoe. It would then be returned to the anvil and adjusted. Finally it would be put in a barrel of cold water to cool. Once again I can remember there was another smell of the cooling metal.

The horse would not move as he carefully placed the new shoe on and fastened it with what seemed to be horrifically long horshoe nails. As a child I was always scared that he might get it wrong and put the nail into the horses foot, but of course, he never did. Wonderful, amazing memories.”