You are here: HomenextPlacesnextMuseumsnextBrighton Museum and Art GallerynextEstablished originally in 1860 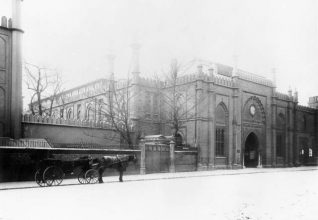 zoom
Entrance to Brighton Library and Museum, April 1900: The entrance to Brighton Free Library and Museum in Church Street, designed by the borough surveyor Philip Lockwood in 1872-74. Soon after this photograph was taken, a new entrance was built and the further ornamentation was added to the facade.
Image reproduced with kind permission from Brighton and Hove in Pictures by Brighton and Hove City Council 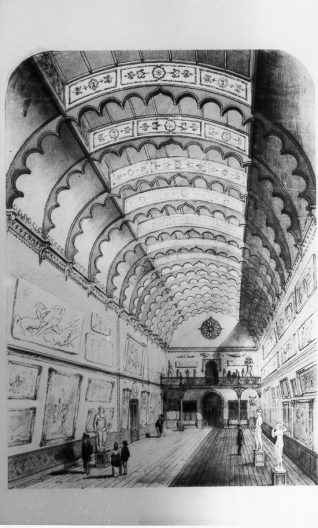 zoom
Design for Interior of Brighton Art Gallery, c. 1870: A design for the planned interior of Brighton Art Gallery by Philip Lockwood, Borough Surveyor. The gallery opened in 1873 in part of the former Royal stables, remodelled by Lockwood in 1869 for a public museum and library. The gallery as built has an altered roof design constructed in the form of a shallow barrel-vault. This gallery formerly housed the permanent collection, but currently displays a collection of Art Deco and Art Nouveau furniture and ornaments
Image reproduced with kind permission from Brighton and Hove in Pictures by Brighton and Hove City Council 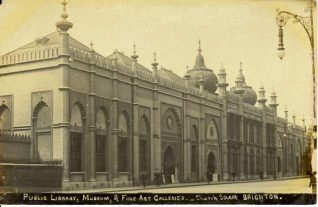 zoom
Public Library, Museum and Art Gallery, Church Street, c. 1905: The Library entrance on the right was added in 1902 when the Victoria Public Library opened within the building. The arched entrance under the clock led directly into the large central hall of the Museum and Art Gallery. The entrance to the Art Gallery and Museum continued to be used until about 1910, when it was bricked up to form a window, requiring the use of the library entrance.
Image reproduced with kind permission from Brighton and Hove in Pictures by Brighton and Hove City Council

a) HISTORY: Using the proceeds from several exhibitions which were held at the Royal Pavilion in the 1850s, a municipal art collection was established in some of the first-floor rooms of the Pavilion in about 1860; in 1862 the display was joined by various museum collections that had been presented to the corporation. In 1869 the museum collection was augmented by that of the Royal Scientific and Literary Institution which also left the town a collection of books to enable a reference library to be established at the Pavilion.
The space available in the Royal Pavilion soon proved inadequate, and so borough surveyor Philip Lockwood remodelled the former servants’ quarters, coach houses and stables connected with the Dome in Church Street as a new art gallery, library and museum, fitted out in Moorish style. The new art gallery opened on 20 January 1873 in the large central hall, into which the entrance led directly, and the new museum was opened on 12 September 1873 at the same time as the library by Dr Carpenter of the British Association; rooms were devoted to archaeology, botany, geology and zoology. Several important private collections were added during the next few years, and rooms were kept in the Royal Pavilion as an annexe. The exhibition galleries were enlarged in 1894, and further alterations were made in 1901 when the refurbishment of the Town Hall had been completed, thereby releasing rooms previously used for other purposes. On 5 November 1902 the Victoria Public Library opened in its present position, allowing the museum and art gallery to expand to their present size; a new entrance hall was also made, and the fascade was altered somewhat with the addition of oriental ornamentation. The museum, art gallery and library buildings are now listed as being of special architectural interest.