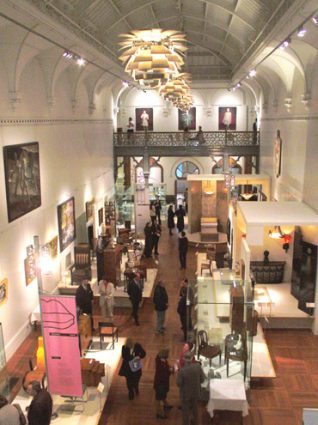 Very Brighton and a touch of Hove
It is a stunning example of a new wave museum, not the clutter of the old style or the approach that gives you a fragment of pot on a wall of hessian. It’s all very stylish and very Brighton (and may be a touch of Hove!).

The art objects, furniture and sculpture are set in context with other works of their period, so you have an idea of the context. There is a good shop with some excellent books, lots of staff, and I believe that the catering is now done by the wonderful team that were at Hove museum (proper tea and cakes and even Marmite soldiers).

The History rooms
The History rooms are arranged on the idea of coming to Brighton and living in Brighton with good material from the collections that were previously unseen (by me anyway) and masses of artefacts. The costumes seem to have more relevance to Brighton than before (chastening to realise I knew the contributor of the skinhead costume set!)

The film display is a stunna with every known film of Brighton either showing or as stills and the catalogue accompanying it is a good buy.

I was invited to the launch party(s) twice…! Once as a “Friend” of the Royal Pavilion and once as a (minor) consultant (over a fried breakfast in the OK Cafe) in the early stages of the plans.