Origins and myths of The Goldstone

There are various myths concerned with the formation of Devil’s Dyke and the huge rock named the ‘Goldstone’ which was so named because of the hints of gold in its makeup, The legend goes that when the Devil was digging a trench which would allow the sea to flood the many local churches, he stubbed his toe on the rock and in anger kicked it over the hills. The rock landed in what is now known as Goldstone Valley.

Click on the images below to open a larger version in a new window. 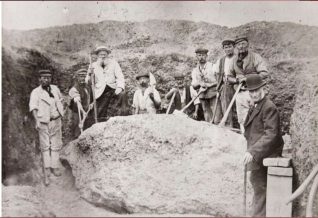 The recovery of the Goldstone in 1900 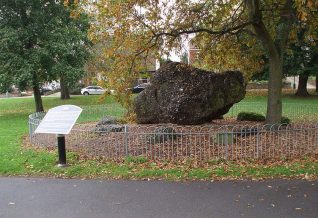 The Goldstone in Hove Park

The ‘Goldstone’ stood for many years in farmland at Goldstone Bottom. But in the early 19th century the theory was proposed that it was in fact a sacred stone of the Druids. This led to large numbers of people visiting the site where it was found, and causing damage to the surrounding farm crops. In the early 1830’s Mr. William Marsh Rigden, the landowner, buried the stone and the smaller surrounding stones, to protect his land from the sightseers. The stones lay buried until 29th. September 1900 when William Hollamby, one of the Hove Commissioners, discovered their position and had them unearthed. In 1906 the stones were put on display in the newly opened Hove Park.