The use of the Level during the 2nd World War was visible in the geophysical surveys and background historic research. The Land Army based in Wellington Road did their training on the Level in the 1940s, at which time according to one Land Army office person, it was covered with different obstacles to stop the enemy from parachuting in there. In fact The Level was also used in the early 1800’s as an exercise and drill ground for soldiers stationed in barracks in Church Street during the Napoleonic Wars.

The most northern quadrant of the North Lawns was taken over by the Royal Engineers Nissen huts to manage the increase in war records and these remained until 1955. Air raid shelters were dug into position on the eastern quadrant. There has been some anecdotal evidence and some photographic indication of bomb damage to the perimeter of The Level.

The National Fire Service had located their emergency water pool there. A lot of military machinery and transport was using the Lewes Road, so much so that it was hard to cross the road. The Canadian Army was reported to have used the natural camouflage of the tree lined pathway around The Level to hide their tanks in the days leading up to D Day, before they were transported overseas, so that they could not be seen from above. 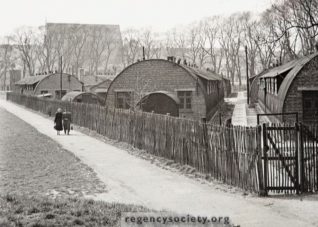 This colony of Nissen Huts was erected early in the war for the R.E.Records Staff, who were there for about 15 years. These photographs were taken in March 1955 and the buildings were removed later that year. 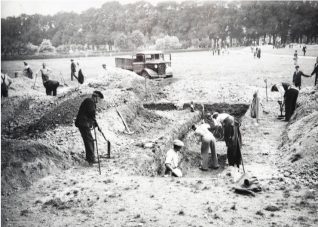 Digging trenches on the Level on that fateful Saturday, 2 September 1939, the day before Britain declared war on Germany, and the Second World War began.