History of the spa 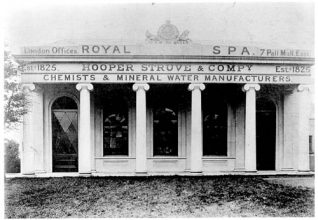 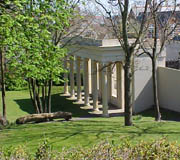 In the early part of the nineteenth century there were spas all over Europe as they were highly fashionable. A problem for Brighton was that it lacked the natural water necessary for a spa. There was a natural spring and spa at St.Ann’s Well Crescent Gardens in Hove but this was too far away for the ‘fashionable folk’ in Brighton. Frederick Struve, a research chemist from Saxony, had invented a machine that reproduced the characteristics of natural mineral water using chemicals. He believed there was enough trade in Brighton to set up an establishment and in 1825 Struve opened the pump room of his ‘German Spa’.

A choice of waters
The ‘Fashionable Chronicle’ in the Brighton Gazette provides a description of the building: ‘The building consists of a large handsome room fifty or sixty feet in length, and of proportionate breadth and height. A fine flight of steps lead to the noble saloon, on which are placed Ionic columns, supporting a portico in the purest Grecian taste. On the side of the Saloon opposite the entrance runs a counter, behind which are ranged cocks that supply different kinds of waters.’ Customers could obtain the waters of Karlsbad, Kesselbrunnen in Bad Ems, Marienbad, Bad Pyrmont and other continental spas.

Queueing for a cure
The curative waters received considerable patronage from the upper classes. In the first season there were 333 subscribers to the spa and in 1835, ten years after opening, Struve obtained the patronage of King William IV. Struve consequently renamed it the ‘Royal German Spa’. During the 1830s the spa reached the height of its popularity and had many distinguished visitors.  Struve maintained that most of his cures would have no immediate effect and that it would take about a month before his customers would  be restored to their full heath. The spa was open between May and November from 8 a.m. to 10 p.m. One contemporary writer complained that the pump room was not big enough for the number of people using it and that the number of carriages waiting in the road down to the sea ran into three figures.

From spa to nursery school
By the 1850s the practice of taking waters fell out of fashion and the pump room closed. Struve was now producing bottled mineral water and fizzy drinks. In 1891 another soft drinks firm merged with Struve and called themselves Hooper Struve Ltd. They very successfully continued to manufacture drinks still using the 150 foot well sunk by Struve. Only in the Second World War did the spa stop production when it became a fire watching station and a gas-mask issuing station.

In 1963 the company moved to larger premises, leaving the sa as a storage shed. The pump room became derelict and vandalized. The pump room was demolished in the mid 1970s but thanks to a long public campaign to save it, the spa’s neo-classical façade remains. The Royal Spa Nursery School was built on the factory site and opened in 1977. A fire started by vandals destroyed the modern building in 1985 but it was soon rebuilt. The Nursery School continues to this day on this site.