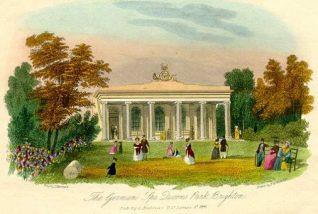 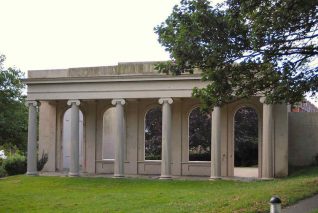 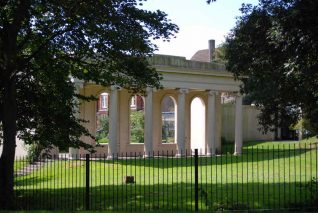 b) ROYAL SPA: At the south-western corner of the park stand the remains of an artificial spa opened in 1825 by Dr F.A.Struve, who had opened similar spas at Berlin, Dresden and Leipzig. Mineral waters chemically identical to those of many European spas were concocted with water from a well, and the spa building, which was declined by a Mr Lorraine, became very popular. Indeed, it may even have been visited by William IV and Queen Adelaide; certainly the spa was always referred to as the `Royal’ German Spa after a royal warrant was obtained in 1835. However, by the 1850s its popularity had declined so much that the pump room closed, but Hooper Struve Ltd continued the manufacture of bottled mineral waters in the building until 1965. The redundant building then became derelict and eventually passed to the corporation. The pump room at the rear was sadly demolished, but the Ionic portico and north wall were restored by T.R.Wilhiams as an open loggia in. 1978 after a long battle to save it, and the structure is now a listed building within the grounds of the Royal Spa Nursery School, a small modern building also of 1978 which was badly damaged by fire in December
1985.