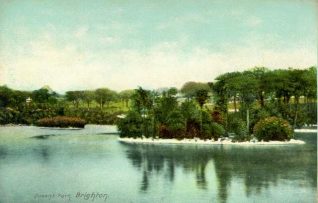 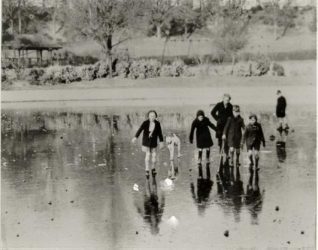 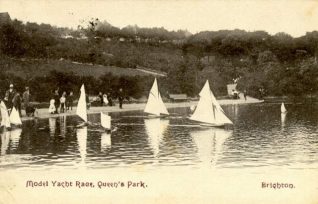 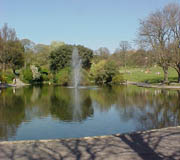 Between 1891-2 Queen’s Park was being re-laid in time for its opening to the public. The most notable change was the new lake that was built on the site of the roller skating rink.  Originally the lake received its water supply from the water tower at Attree’s villa. Mr May, the borough surveyor, had designed a stream that would cascade from the top of the park through rockeries and ferns and under rustic bridges until it reached the lake.

Only six inches deep
The artificial lake itself had two islands in it that were covered in shrubs and creeping plants, and ducks and swans soon inhabited both islands. The lake is actually only two feet six inches deep, though it gives the appearance of being much deeper.

Froze over in its first year
In the very first year of the new public park the lake froze over. The Head Gardener, Geo Ward, reported the following:
” Tuesday the ice was examined and found to vary in thickness from two and three quarter inches to four and a half inches. The public were admitted by 10:30 am and about 800 persons were on during the day. Wednesday it was divided by rope, the North end being for sliders and the South for skaters. Number on during the day about 900. Thursday morning during the day about1000. Friday two and a half dozen lanterns were placed round and lighted at 5pm. Cleared off at 9:30. Number on during the day about 1100. Saturday every preparation was made for better alluminations [ sic ] and keeping open late but owing to the number of people the ice gave way and considering it unsafe they were cleared off about 5 o’clock. Number during the day probably 1200…I think each day’s skating gave satisfaction and no serious accidents or immersions occurred.”
Nowadays the lake very rarely freezes over.

A new design for the lake
In 1900 one of the two islands was removed to make the expanse of water larger. This new design benefited the number of model sailing boats and steam boats that regularly floated on the lake.

The lake in WWII
Sometime during the Second World War the top part of the stream was filled in to where it starts today though it is uncertain exactly why this was done. In the summer of 1943 pleasure boats were put on the lake to keep up the spirits of the people of Brighton. Military vehicles were also tested in the lake at this time to test how waterproof they were. It was this assault on the lake’s cement bottom that is largely thought to be the cause of the leaks that later affected the lake so badly.

A period of neglect
As with most of the park, the lake then suffered a long period of neglect and vandalism. By the 1980s it was leaking badly and was dry most of the time. One newspaper report mentions parents’ concerns about their children cutting their feet on the broken glass as they walk through the empty lake to the island. After a public campaign in 1991 the council finally agreed to help to restore the lake in time for the park’s centenary. Nearly 100,000 was spent to reline the lake to prevent further leaking and rebuild the edge around it.

Getting wet on windy days
A new fountain was added in 2002 at the bequest of a woman called June but, as yet, the Parks Department cannot remember her surname. Though enjoyable to look at, it can give passers-by a soaking on windy days.