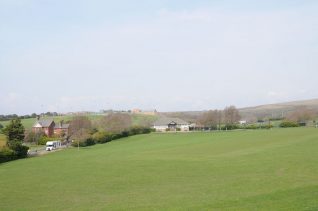 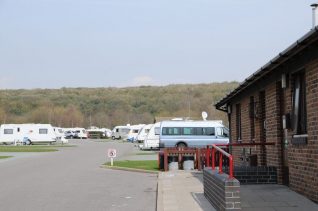 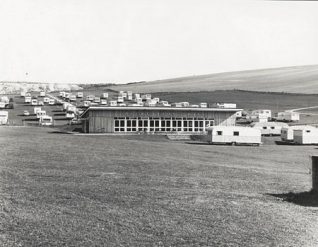 zoom
This photographic print shows the Recreation Hall of the Municipal Camping and Caravan Ground in Sheepcote Valley, Brighton. A number of caravans can be seen surrounding the hall. This photograph was produced by the Borough Surveyor's department. It was presumably taken as a record of the camp site's facilities. The site had opened on 14 May 1938, just one year before this photograph was taken. It was the first local authority owned camp site in Britain. It used a number of buildings that had previously been part of Newhouse Farm. The Recreation Hall was developed from an original flint barn.
Reproduced courtesy of Royal Pavilion and Museums Brighton and Hove

d) EAST BRIGHTON PARK and SHEEPCOTE VALLEY: Whitehawk has the advantage of lying between the open spaces of the Race Hill and East Brighton Park off Wilson Avenue. Covering 60.67 acres in the Black Rock Valley, the land occupied by East Brighton Park was acquired by the corporation in September 1913 as part of the East Brighton estate of 1,065 acres, then part of Ovingdean parish. The southernmost part alongside Roedean Road was once the playing field of the forerunner of Roedean School and was later used by East Brighton Golf Club, but in 1925 the park was excavated, levelled, and laid out with ornamental plantings, tennis courts, football pitches and a cricket square. From September 1923 about twenty-five acres were leased to Brighton College, but financial problems caused much of this area to be returned and in 1947 the Enclosed Football Ground, the home of Whitehawk Football Club (see below), was hedged in on part of the former college playing fields. A large children’s playground was constructed in 1987. {126,204,208,305}
To the north of the park lies the Municipal Camping and Caravan Ground, the first municipal ground in the country, which was opened by the mayor, Herbert Hone, on 14 May 1938. It incorporates the buildings of the former Newhouse Farm; the farmhouse is used as the warden’s residence, the flint barn as a hall, and the stables as a toilet block; they probably date from the late eighteenth century. However, the caravan park is to close by March 1991 to make way for a large leisure development. {108,123,124,126}
The northern part of the Black Rock Valley is known as Sheepcote Valley, and from the 1870s was the site of a rifle-range laid out for volunteer soldiers, giving the former Rifle Butt Road its name. In 1916 the tipping of scavengings commenced, and in 1928 household refuse from Rottingdean was dumped at Sheepcote; in 1952 large scale tipping by Brighton Corporation commenced and continued until April 1982. The valley has now been significantly filled and levelled for use as playing fields, but a ‘household waste site’ remains for bulky household rubbish. A golf driving-range was operated in 1982-4, but the whole area is scheduled for a large leisure development including dry ski-slopes, a boating lake, riding stables, a sports hall, a wildlife park, a hotel and a swimming-pool. In about 1968 the desolate area was used as a battlefield in the filming of Oh!What a Lovely War.{114,123}