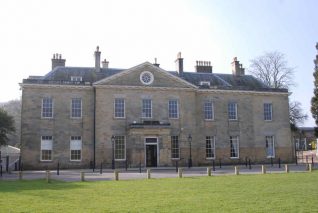 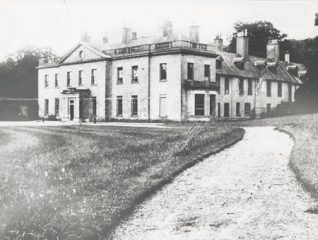 zoom
c1932 This photographic print shows Stanmer House, Brighton. It is a view of the corner of the building, showing its front entrance. The path leading to the house can be seen in the foreground. The photograph was commissoned by the Borough Surveyor's department of Brighton Borough Council. It was amongst a number taken of the area which were presumably used to survey the condition of the buildings.
Reproduced courtesy of Royal Pavilion & Museums, Brighton & Hove

b) STANMER HOUSE: This elegant mansion is faced in a pale yellow sandstone and has a slight, three-bay projection topped by a pediment, but a single-bay extension of 1860 spoils the symmetry. It was built near the site of an older manor house in 1721-30 for Henry Pelham junior, in Palladian style by French architect Nicholas Dubois. The Pelhams became the earls of Chichester and the house was extended in 1775 and 1860. The interior exhibits some excellent fireplaces and panelling, and has a magnificent broad oak staircase.
In 1947 the house was purchased by the corporation as part of the Stanmer estate, and although the west wing was demolished as being beyond repair the rest of the house was restored and is now listed grade I. Until January 1980 the house was leased to the university as offices, but it was then opened to the public and occupied by squatters for three weeks. It is now planned to restore the house fully, and to remove both the Parks and Recreation Department and the Booth Museum to the building.
To the south-west there is a large, attractive garden, while at the rear, on the site of the Jacobean manor house, is the Rural Museum of the Stanmer Preservation Society which contains many interesting exhibits. These include a seventeenth-century listed well-house with lath and plaster walls on a timber frame; the horse ‘gin’ (engine) is still in situ. Stanmer House’s eighteenth-century stables are listed grade II* and are situated in the private Stanmer Nursery area. They are faced in knapped flint and brick, and have an archway entrance into a courtyard, the west wing of which is used as the Victoria Hall by the village. The nearby nineteenth-century, single-storey flint storage sheds, formerly cattle stalls, are also listed.  {1,44,123,228-232}
The Stanmer Nurseries of the corporation’s Parks and Recreation Department occupy thirty-six acres on the site of the house’s kitchen garden, an orchard and two meadows. The nurseries were founded in 1875 at the Lewes Road waterworks, and later occupied three separate sites before being removed to Stanmer from 1953 where they were formally opened on 7 May 1957. Three principal operations are conducted at Stanmer: it annually provides some 70,000 trees and shrubs; 250,000 hardy plants; and thousands of flowers. A horticultural training centre was established in 1966. {45,126,228}