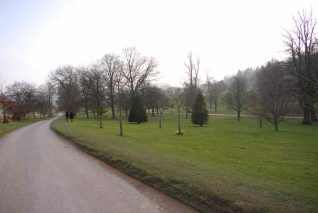 e) STANMER PARK: Originally laid out by the architect of Stanmer House, Nicholas Dubois, in the 1720s, Stanmer Park was planted with trees principally in the period 1720-1800, and particularly by Thomas Pelham, the first Earl of Chichester. In November 1947 the park was purchased by the corporation as part of the Stanmer estate, and although 250 acres were set aside as a public park, 159 of them were later leased to the university. The public park is a beautiful area of gently undulating grassland and is very popular with Brightonians; in 1988 the Stanmer conservation area was extended to include the park in addition to the village. The park also includes the largest area of woodland in Brighton, Stanmer Great Wood, 45% of which was destroyed by the great storm of October 1987. The Brighton bypass, scheduled for completion in 1995, will run through the southern part of the Stanmer estate, skirting the southern edge of the Great Wood.

Standing at the Lewes Road entrance to the park are the Lower Lodges, elegant, single-storey, eighteenth-century listed houses with tall chimneys which replaced the original lodges some 400 yards further along the park road. The Upper Lodges stand at the north-western edge of the park off Ditchling Road, near the picnic area, and are plain, two-storey buildings.

Standing amidst trees to the south-west of the point where the road through the park divides is the listed Frankland monument, a three-sided obelisk in artificial Coade stone on a base of three tortoises which bears the figures of an angel, a man and a woman, with an urn at the top. It was erected in June 1775 by Thomas and Ann Pelham, the first Earl and Countess of Chichester, in memory of Ann’s father Frederick Frankland, M.P., who died at the age of seventy-three on 8 March 1768. {1,44,45,123,228,229,232}