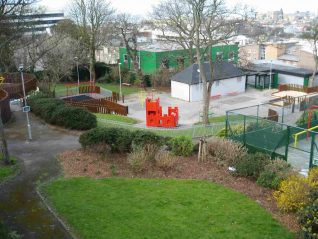 The site of Tarner Park was formerly the gardens to St John’s Lodge, a large three storey house built by Edward Tilbury which was later occupied by his daughter – Letitia Tilbury who married a merchant – Edwin Adolphus Tarner.  The house and land continued in the ownership of the Tarner family until the 1930’s. Although Edwin and Letitia had eight children, only three survived into the 20th century, and by the 1930’s the remaining child – Letitia-Tilbury Tarner now in her late 80’s – disposed of the house and land.

An open air nursery
Part of the garden was donated to Brighton & Hove Nursery Schools Association and was used firstly as a site for the Margaret Macmillan open air nursery, and currently by the Tarnerland Nursery school. St Johns Lodge was left to Brighton Corporation and became the Tarner Home – a charitable hospice. The bulk of the remaining garden was acquired by Brighton Corporation with the condition that it form and remain a public park, which has been its use to the present day.

The topography unchanged
The topography of the park has remained essentially unchanged since it was first developed as a private garden, and the planting and landscaping scheme inherited in the 1930’s has been altered only in the addition of buildings and play features and the creation of direct access from Sussex Street rather than Tilbury Place.

Flint perimeter walls
The flint perimeter walls remain, as does the TarnerTower – a folly built by Edward Tilbury at the time of the initial garden layout – with the exception of a footbridge which linked the tower to the upper garden (now Tarnerland Nursery). Around the site perimeter, St Johns Place has been extended to meet with Sussex Street, and Richmond Hill has been replaced with the Carlton Hill school site. Priory House now stands at the north end of Tilbury Place. 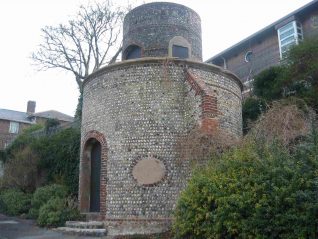 Grade II listed folly
The main built feature of heritage interest in the Park is the Grade II listed folly and attached walls at the top of the park. Of additional interest is a figurehead carved into the wall above a blocked up archway which led into the upper garden, now Tarnerland Nursery. Significant confusion has arisen regarding the Tower’s purpose. The folly in Tarner Park, now commonly known as Tarner Tower, was built by Edward Tilbury in the early 1800’s at the time of initial layout of the garden. A badly vandalised plaque to this effect remains just legible inside the lower floor of the tower.

Panorama of the city
Numerous sources, including the Encyclopaedia of Brighton by Timothy Carder, and the listed building register, attribute the construction of the folly to Edwin Tarner, and repeat the tale that he built it as a viewing platform to gain early sight of his ships returning from the Americas. Although the folly does enjoy a splendid panorama of the City, it was apparently not enough for Tarner, who built a second tower nearby on Sussex Street. This tower was larger and at the top of the hill and is a credible venue for the looking at ships story. It was described by the Sussex Daily News in 1941 as ‘the queerest building in Brighton’ and seems to have been demolished in the early 1950’s.

An air-raid shelter in WWII
Tarner Park under council ownership has continued to provide an open space for young people since its acquisition. During the Second World War an air raid shelter was placed in the park, and after the war play features – slides & swings etc… were added. The folly at this time was used as a park keeper’s store, and local anecdote recalls the park keeper stationing himself on the viewing platform to better observe behaviour and maintain order. The first new building – a toilet block – was added in the 1970’s and the second building – the play base – was added in the late 1980’s, alongside a range of other new features. Items have been renewed and added as funding has permitted since then.

Space for informal recreation
As well as offering an outdoor space for informal recreation, in recent years the park had become known as a ‘tolerated’ graffiti site, attracting participants locally and from further afield, however in early 2008 the council, working with local residents and park users, ended its status as a tolerated site, and following a repaint of surfaces the park is now graffiti free.