You are here: HomenextPlacesnextPubsnextMy favourite local pubnextDrinking in the 1950s/60s

Drinking in the front room?

When I lived in Brighton in the 1950s through the 1960s, I think I must have been in most of the pubs in Brighton at some time or other, even the ones with bad or dubious reputations then, like the Basketmakers, Eagle, Half Brick, the Great Eastern and a few others in Kemp Town. Saying this though, in those days the pubs then seemed like the front rooms of the local residents who made them their own.

I once lived in Islingwood Street. There were six pubs in the short length of this road, one on every corner, and two in the middle. Our house was in the middle of the two in the middle of the street. One evening I went in to one of them for a couple of quart bottles of Brown Ale; do you remember them? I was asked which number my house was, and then told I was in the wrong pub. Apparently the three or four houses the other side, including mine, only went into the ‘other’ pub. Friendly or what? Or was this the pub tradition then?

No ladies in certain bars

There was also another pub in North Road, opposite the Heart and Hand, with beautiful cut-glass windows dividing the different bars. The ladies weren’t allowed in two of the bars at all, and on a Sunday morning they had a blind Rock and Roll pianist playing Jerry Lee Lewis songs. Does anybody remember the Running Horse in Black Lion Street, the Eagle in Gloucester Road, or any of the cider bars? One of these had wooden floors with fresh sawdust spread over it every day.

What about Doctor Brighton which also had a blind pianist playing for years, or the Fortune of War, and the Belvedere? There was also one pub whose name I have forgotten which was between Pool Valley and The Ship. It had a bay window sticking out over the pavement with a resident drum kit in it for whoever played there. I remember walking past one night to go in there and the drum kit, complete with drummer, came flying out onto the street. We decided to go somewhere else that night. Happy days!

What were your favourite pubs in the 1950s and 1960s? Did you frequent some of those mentioned above? Please share your memories with us by posting a comment below. 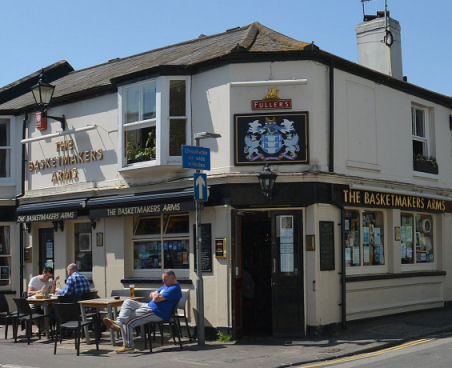 The Basketmaker’s Arms: photograped in 2013