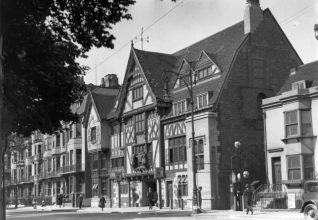 zoom
King and Queen, Marlborough Place, 1934: The original King and Queen inn was a bow-fronted two-storey Georgian building on the site of a farmhouse which had gained a license in 1779 to cater for sporting events on the North Steine. The Inn was also the venue for Brighton's corn market until 1868 when the Corn Exchange opened.
Image reproduced with kind permission from Brighton and Hove in Pictures by Brighton and Hove City Council

Inns, taverns and ale-houses in Brighton have been regulated from at least 1618, and by 1800 there were 41 establishments recorded in the town. The Beer Act of 1830 permitted any ratepayer to open a beer-house on payment of two guineas; in Brighton 100 were licensed in the first week, by 1879 the number of premises had grown to 424, and in 1889 there were reported to be 774 public houses in the town, one for every 130 residents. Now, in 1990, there are still 235 public houses in the borough {124a}, one for every 600 inhabitants, but former public houses are to be seen in many streets; North Road , for instance, had 10 ‘pubs’ in 1931. The greatest concentration is naturally in the town centre, but particularly around Brighton Station , St James’s Street and the Old Town . The road with most public houses is Ditchling Road which has seven; Lewes Road has six, while Church Street , St George’s Road and Southover Street all have five.