In the 1960s, me and my friends’ meeting place was the Bath Arms, in The Lanes. It was situated on a corner plot, just opposite a very elaborate church known, I think, as the Tabernacle. This church later became a restaurant. The Bath Arms had two rooms. The first was the normal, smoky, warm and atmospheric bar. The second was a games room, at the back. Apart from the obvious dart board area, there was a pinball machine and a bar-billiards table. The latter was a game involving the use of a billiard cue and the aim was to pot balls into holes on the table, while missing various mushroom shaped objects that stood in your way. Two people took turns in playing this. When all the balls had been potted, your game was up and you had to pay for the next round of the game. 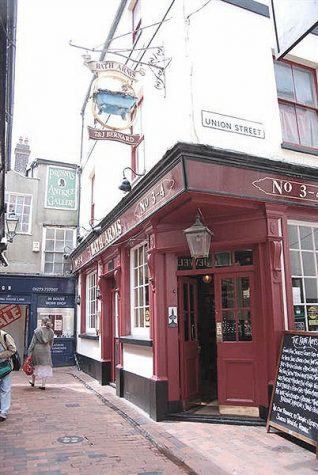 Life in these sorts of rooms was very polite, considering the likely age of the customers (16-20). If you wanted to be the next person to play the pinball machine or the bar-billiard game, you put the cost of a game onto the edge of the machine. That staked out a claim. Once your game had finished, you had to give way to the person who had put down the money. I wasn’t very good at bar-billiards but regularly clocked up ‘free games’ on the pinball machine. Push the pinball machine too far, though and the lights would go out and that was the – premature – end of your game.

All of these activities were accompanied by pints of beer. My group of friends were all underage but – in those days – no one seemed to worry too much. There were rumours that some pubs were raided by the police in order to identify underage drinkers. I never experienced this but I think it was the pub, rather than its drinkers, got fined, if this happened. Drinking a few pints at the Bath Arms was a prelude to going down to the Basketmaker’s Arms, to drink half pints of Scrumpy – very strong cider that seemed not to be sold anywhere else.

After that, we often went to the Aquarium ballroom to listen to various artists, including the blues singer, John Lee Hooker and the band ‘The Who’. My recollection of The Who is that they were the loudest band I had ever heard. At the end of their gig, Pete Townsend went through his ritual of breaking up both his guitar and his speaker. No one seemed to know why he did this – it was probably a bit of sixties nihilism. We also used to wonder if the guitar and speaker were ‘fakes’. Surely, we thought, no one could afford to smash up two expensive pieces of equipment, every time they played?