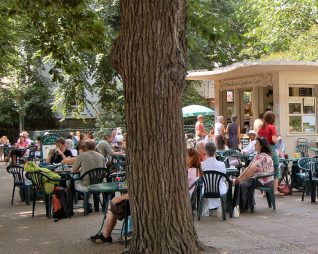 If you can tear your eyes away from the Royal Pavilion, and look beyond the curvaceous flower beds, tucked away under the trees on the West side of the lawn lies The Pavilion Gardens Café. You probably won’t be surprised to learn that this small building surrounded by tables and chairs beneath an avenue of elms has a history all of its own.

A quiet cup of tea
This is where Brighton people come for a cup of tea, a rock cake, a gossip with friends or just a quiet sit in the sun. Although it is so close to the Pavilion it is often overlooked by tourists, perhaps because of its quiet location amongst the shrubs and trees at the end of the garden.

Three generations of the Sewell family
David Sewell who runs the café is the third generation of his family to do so. Curators come and go, mayors and town councillors rise to office and depart, but this family business just keeps going.

All thanks to Hitler!
It was Adolf Hitler who began it all. The Fuhrer did not come to Brighton in person to bake cakes, but he was threatening to invade Brighton during the war so the small businesses and tea shops on the sea front were given notice to close down. Herbert Tennent was one of those tenants. Stripped of his livelihood, in 1941 he approached Brighton Council with the proposal that he open a café just inland on the north side of the Pavilion. Within hours the council sent a taxi round to ask how soon he could open, and they laid a concrete plinth for his tea shop to stand on.

Memories of the old days
Mr Tennent was David’s grandfather, and even when he passed the business on to his daughter June and her husband Douglas Sewell in 1976 he continued to come down every morning and bake cakes until the time of his death. The family still have memories of the old days, when the main London Road ran along the West side of the Pavilion and the East Lawn was covered in deck chairs all summer. Herbert Tennent received coveted invitations to the Mayor’s garden parties held on the Pavilion Lawns, his children roamed the Pavilion watching the craftsmen at work painting gold leaf.

A new location in 1950
Then in 1950 the café moved to its present location with a more permanent building. So permanent in fact that it is still there today, looking identical. 28 of the sturdy metal tables that Herbert bought in 1950 for the huge sum of £5 each are still in daily use, having been regularly painted and renovated for over 50 years.

Very much a family business
The Café is open between March and November and is very much a family business run by David and his wife Vanessa with regular daily input from David’s parents. Some of the staff are permanent fixtures as well, Nina has been pouring cups of tea behind the counter for 36 years. It’s all very dependent on the weather of course. On a wet day there is no point in opening the shutters, but all that can change very quickly and if the sun starts to shine the tables fill up in no time.

The North Laine back garden
All the regulars know how it works, and quite a few of them come down every day. Mums with push chairs watch their toddlers explore and chase the pigeons in safety. Older people gossip and read the paper as they watch the world go by. For quite a few North Laine residents this is viewed as their back garden if they don’t possess a patch of green on their own property.

If you want to see Brighton taking a break from its hurly burly image look here in this quiet little corner of the City centre.