The Coronation Window: click on image to open a large version in a new window

Photographs saved by my parents

I recently came across these photographs that my parents had wrapped in tracing paper and obviously protected over the past 60 years.The first shows the Coronation Window itself. The second shows some of the art class working on the project for the window in 1952. Front row is Ian Waddell (left) and Joe Osbourne. Behind is Alan Burt (left), Alan Woodart and me, Barry Flahey.

If memory serves, the Coronation window was initiated by Mr Alex McKinley following the success of the Festival of Britain window. It certainly was a major project and many students who opted to take art classes did a little bit toward completing the final window. I do not remember if it was ever put on display and have no idea what eventually happened to it.

A great influence on my career

I am still working in the arts field , drawing and painting insects and plants for the Canadian Agrifood research dept. I think it is largely due to Mr Alex McKinley and his teaching at the Brighton Building School for Building and Engineering that I went on to forge a career in the arts.

Do you remember the Coronation Window? Maybe you worked on it? Do you remember Mr McKinley? If you can share your memories with us, please leave a comment below. 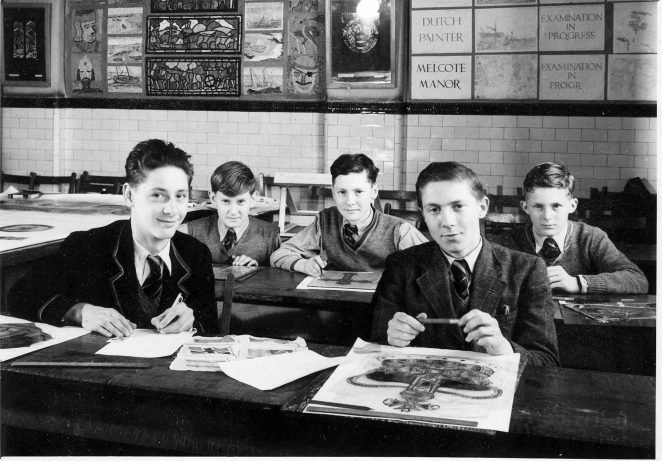 Front row is Ian Waddell (left) and Joe Osbourne. Behind is Alan Burt (left), Alan Woodart and me, Barry Flahey.