You are here: HomenextPlacesnextSchoolsnextCottesmore St Mary's RC SchoolnextStarting school in 1958 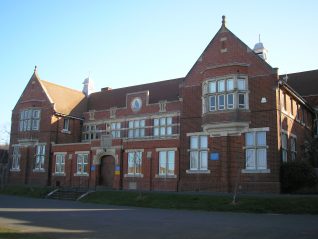 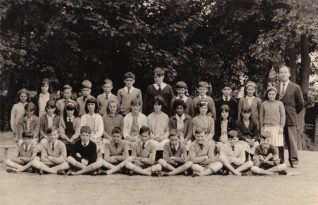 zoom
Cottesmore St. Mary's class of 1965, with Mr Joyce
From the private collection of Peter Groves 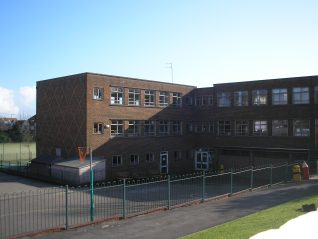 zoom
Cottesmore St. Mary's north side, metal work and woodwork rooms on the right, science, needlework and cookery on the left!
Photo by Peter Groves 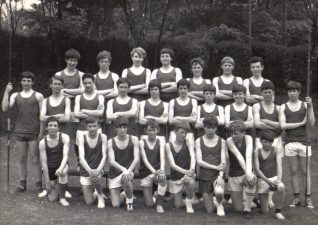 zoom
Cottesmore St. Mary's boys athletics team c.1969. I wont say which one is me, Beatles hair cuts were in fashion!
From the private collection of Peter Groves

Just as Jillian (who I have never met – except on the internet through My Brighton and Hove) was leaving school in 1958 I started at Cottesmore Infants School in the Upper Drive, Hove.  I can remember my mum taking me to see the school before the fateful starting day arrived.  I hid behind my mothers skirt as she stood speaking to the headmaster Mr Shearstone.

The old building
The building had a very old feel to it, I believe it was once a private boys school, probably built towards the end of the 19th century.  I remember the very high ceilings, particularly in the hall, creaky wooden floorboards, and of course who could forget the spooky enclosed cloisters which ran by the side of the dinner room, a dark cave like passageway, to frighten young children!!

First teachers
My first teacher was Miss Bell, others I remember were, Mrs Brain, Mr O’Neil and the music teacher Mrs Hobden, who seemed to favour children who sang in the choir.  No one could forget the loveable Mr Joyce, who it was rumoured (with no foundation) was mad because he had been an aircraft rear gunner in the war, and the bomb blasts had sent him crazy!

Football trip
The best school outing that I remember was the trip up to Wembley to see England school boys team against West Germany organised by Mr O’Neil.  This would have been around 1963/4 just before England won the World Cup.  There was singing and great excitement on the way up, “my eyes are dim I cannot see I have not brought my specs with me” etc… and tiredness on the way back.  We stopped at Chessington Zoo, which in those days was no World of Adventure, just a plain zoo!

School Chapel
As there was no chapel at Cottesmore, we were taken over the road to the Sacred Heart Convent for mass, through the big heavy front door.  I recall that it was then a convent, the school having closed.

Cottesmore St Mary’s – Randendin Manor Road, Hove
At the age of 11, having failed the 11 plus, I moved to the secondary modern school in Randendin Manor Road.  My sister was 2 years older than me and also went to Cottesmore, however my younger brother (the bright one) passed his 11 plus and went to the Xavarian College close to the Pepper Pot in Queens Park Road, it must have taken him ages by bus from Hangleton.  Anyway, after my brother being there only about 1 year the Xavarian College was relocated to the Sacred Heart building in The Upper Drive and was also renamed The De La Salle College (probably about 1968).  I couldn’t say what happened to the nuns!

The teachers
Back to Cottesmore, domestic science (cookery) was appropriately run by Mrs Cook in the late 1960’s.  The class was on the north side of the school overlooking the boy’s playground.  The building being 3-story, housed on that side, the boys toilets and undercover area for when it was raining. Above that was the metalwork shop, which was run by Mr Randle, and above him was the woodwork shop.  In 1965, when I started, Mr Bratley ran the woodwork class, however he died suddenly, possibly late 1965 or early 1966.  After some time the new woodwork teacher arrived, Mr “Woody” Harrison, who was a fantastic teacher, strict but patient and fair.  It’s almost hard to believe in this day and age, but he would set the class up, make sure all was running smoothly, and then have a cigarette in the adjacent stock room.  He would the watch the class, with his eye on the door in case any other teacher came in and caught him smoking!  He was ex-army and a very good teacher, who also taught technical drawing.  Between him and Mr Randle they gave me grounding for my future in engineering!

North side
Adjacent on the north side, on the ground floor was the science class run by Mr Valdez; still there many years after Jillian had left!  On the first and second floors above the science lab, I can only remember that the domestic science class was on one of these floors.  Was the other the needlework class?

South side
On the south side of the school was the girl’s playground, adjacent to the assembly hall.  So the boys and girls were separated at playtime, except in the summer when both came together on the playing field!  The assembly hall stage doubled up as the canteen at lunchtimes and below the stage were the sports changing rooms.  In my day Mr Tony Prior was the Sports Master, he was probably in his mid 30’s.  Although I was not very good at ball games, I didn’t have the co-ordination, I was very good at running, the longer the distance the better, and was in the athletics team.

Maths was not my favourite subject
I found the maths with Mr O’Burn, very difficult and was dropped down to the CSE class with Mr Prior, who seemed to have time to explain.  This worked out well for me as I got a grade 1, equivalent of a GCE, but without the pain of Mr O’Burn.  Mr O’Burn’s class was on the ground floor overlooking the playing field; adjacent on the other side was the boys cloak room.

The headmaster
The Headmaster in 1965 was Mr Smith, however he was not a well man, and was soon off sick.  The likeable deputy Mr Berry stood in his place.  Mr Berry taught history, one of my favourite subjects then, as it is now!  The RE teacher was Mr Gee, a very nice man, my mother still sees him at church on Sundays!

Changes of the late 1960’s and early 1970’s
In the late 1960’s a new member of staff joined the school, Mr Deverux, who taught English.  Soon after his arrival in June 1970 I left Cottesmore, however in the September of that year the school amalgamated with the De La Salle College over the road in the Upper Drive, in the old convent building.  It was renamed Cardinal Newman Comprehensive School.  On one side of the Upper Drive was the lower school, with the upper school on the other side.  Mr Deverux was the new Headmaster.  This arrangement continued for many years, although the name was changed to Newman.  More recently, within the past few years Newman centralised to the old Sacred Heart convent building and the Cottesmore Secondary Modern building became the Brighton & Hove High School for Girls.