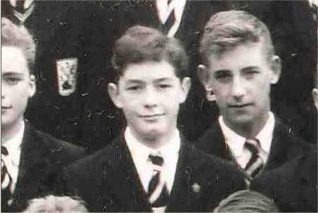 In 1957 a panoramic school photo was taken. It is surprisingly detailed showing the faces of about four hundred students, all born between 1940 and 1945.

Editor’s note: Don sent in four photos which I have stitched together to remake the original panoramic shot.  Apologies in advance – it is not perfect.  But it does show each of the students in enough detail that they could be recognised.  Click on the image which will then open in a new window.  If you then click it again you will see the full version.

Can we go for a website record on the number of people who can be named on this?  What fun – let’s try – so over to you.