You are here: HomenextPlacesnextSchoolsnextDowns SchoolnextCamp beds and joined up writing

Camp beds and joined up writing 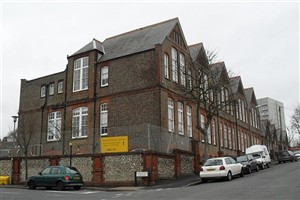 My first school experience happened at the age of four in the 1950s. I had not previously been to a kindergarten or nursery school. For the first few days, I was taken to school by my mother. After that, I was on my own; the walk to school took about 15 minutes. In the first year of school, we sat on the floor, at small tables. Most of the time was taken up with games and with some formal lessons. We progressed to sitting at desks; each desk housing two pupils. In the early days, we had a snooze in the afternoon. Camp beds were laid out in the school hall and we curled up on them, under blankets.

Later on, we were taught letters and numbers. We were shown how to write them and used wooden pens with simple nibs These were dipped into inkwells, to the right of each pupil. I always enjoyed watching the teacher filling these inkwells from a large container of ink. Later, still, we were taught ‘joined-up’ writing. The style was very simple and with no ‘looped’ characters. I have only ever written in this style, since.

Do you remember those camp beds? Please share your school memories by posting below

Apart from general play, two events remain with me about being in the playground. First, every first of May, we danced around a maypole. It had coloured ribbons, falling from the top of the pole. By dancing and holding these ribbons, the maypole slowly got covered in a swirl of colour.  On another occasion, we were taken out to witness an eclipse of the moon (or, perhaps, the sun).  We were told not to look, directly at the sun and given photographic negatives to view the event. The sky went dark for a few minutes. I am not sure we knew what we were looking at but felt – in our own childish way, that it must have been something important.