You are here: HomenextPlacesnextSchoolsnextElm Grove Schoolnext"A way of life that was never to return."

"A way of life that was never to return." 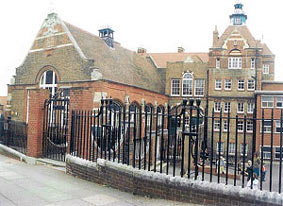 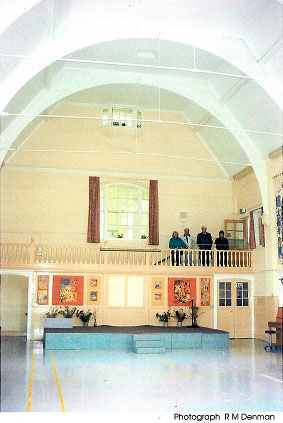 Elm Grove School celebrated its Centenary in 1993. The informative booklet that was published by the school for the centenary gives some interesting facts. When the present primary school building in Elm Grove was first occupied on the 19th June 1893, 304 mixed infants transferred from Bentham Road School. On 1st October 1906 Elm Grove Junior Mixed Department opened in Wellington Road.

Double sessions with St. Luke’s
During 1916, Elm Grove had to work double sessions with St Lukes Terrace School as that had been taken over for a military hospital and this continued until 1920. In the reorganisation in 1928, the Infants Department moved to Wellington Road the 7 – 11 year olds occupied the bottom floors of the building in Elm Grove, and the Secondary Girls were on the top floor. The Secondary Boys Department was dispersed to other schools in the area.

Arriving at the Junior School
This was the situation when I moved from the Infants to the Junior School in 1936. Although it was a large building, the interior design was so arranged, that the younger children for the first two years were on the ground floor, and older junior pupils were on the first floor. A mezzanine floor where a lofty and spacious assembly hall was built separated the two floors. There was a slope up to the hall from the ground floor and stairs with a small gallery down to the hall from the first floor. Part of the ground floor corridor was lined with tall cupboards. There were glass doors to the top half of the bookcases on which were displayed posters declaring that ‘Cleanliness is Next to Godliness’ and ‘Manners Maketh Man’.

The new routine
My first Teacher was Miss Clarke who soon had us settled into the new routine. Monitors were chosen for giving out books and pencils, and I was chosen as flower monitor. On Monday mornings it was my duty to put any flowers that children brought into a jam jar of water. Mostly they were wild flowers gathered over the weekend already drooping the buttercups having lost their petals. In Spring sticky buds appeared, and at some point in the term we all grew a broad bean in a jam jar with water and blotting paper.

Mr Hughes the Headmaster
Mr Hughes the Headmaster, was a kindly father figure who nevertheless could be stern when occasion required and did not hesitate to administer the ultimate deterrent of ‘the strap’. His somewhat portly figure always sported a white waistcoat with a gold watch and chain. It was his habit to tour the classrooms in the morning checking with the teacher and having a word with the class. Sometimes he commented on attendance, and if it was raining observed that it was no excuse for absenteeism and that we were not made of sugar and would not dissolve following this up with an explanation of dissolving and melting. One of his regular visual jokes was to draw on the blackboard, a weathervane with the N for north upside down and ask the class to spot the mistake.

Absence from school
Absence from school was not tolerated except on medical grounds and after registration the man from ‘The School Board’ called on homes of absentees to find out the reason. In my home the ‘School Board Man’ was regarded with great awe, and we dared not even be out of bed if we were at home feeling unwell.

Hymns and prayers
The whole school assembled in the hall regularly for hymns and prayers. We learned psalms and long bible passages without realising it. Mr Hughes said the even numbered verses and the pupils the odd numbered verses. By repetition the top classes knew it all by heart and the young ones coming in soon picked it up. Mr Hughes was very keen on singing. We learned the melodies by the tonic solfa method, Mr Hughes beating the time with a long cane. Hymns, traditional songs and classic pieces were all part of our repertoire.

Learning to swim
As soon as we were settled in to junior school we were given the opportunity to learn to swim. For several weeks we practised the breaststroke in the hall. Lying across forms with arms and legs free we tried the arm movements and then the leg movements finally combining the two. Eventually we were considered proficient in dry land swimming and marched in crocodile fashion to St Luke’s swimming baths, with our bathers and hats rolled up in a towel. The smell of the chlorine took our breath away. The girls who wore knitted bathing costumes were weighed down with water. I must have been away sick when the first visit to the swimming bath was made and joined the class on the second visit. I had not seen such a large pool of water before and didn’t realise the deceptive appearance of the depth. We were told to sit around the edge at the shallow end and asked who would volunteer to ‘slide’ in. No one volunteered and as it looked so easy I put up my hand. Disaster followed as the bottom was further away than I thought and I floundered underwater all instruction about swimming forgotten. Suddenly a pole appeared within my reach. I clutched the pole for dear life and was hauled to safety eyes stinging and with all confidence in the water gone forever. At that time there were no armbands, no floats and the teacher fully clothed gave instruction from the side. I was hailed with applause and told how brave I was but I felt more foolish than heroic.

Open Day
Everyone looked forward to Open Day when parents and relatives came to watch us in class and inspect the art work and examples of writing and arithmetic that had been chosen to line the walls. At the end of the Autumn term a temporary stage was put up in the hall and an entertainment was rehearsed each class providing an item. We all received a commemorative mug and a medal on a ribbon for the Coronation of King George VI.

A third of a pint of milk
A third of a pint of milk in a glass bottle was provided every day. The cardboard disc in the top with a push out hole for the straw is a well remembered feature of those times. The milk was usually enjoyed but when it had been standing in the summer heat it was less enjoyable and in very cold winter weather it was sometimes frozen into a block. The boys’ and girls’ playgrounds were separate. In each playground there was a shelter to use in inclement weather. This was built against a side wall with a slate roof and a long bench running along the back. The lavatories were outside but so were the lavatories in most of the surrounding terraced homes so we didn’t feel deprived. Every so often a fresh load of gravel was put down on the playground and for weeks it was advisable not to fall over as the loose gravel claimed many casualties who had to be treated with iodine and bandaged up. If the ground was smooth the girls took whip and top for playtime and skipping rope in season, or a ball. There were some good walls for ball playing. Over arm, under arm around your back, under leg, bounce on the ground, the variations were endless. I loved to sit on the ground, back against the wall and look up at the sky until it seemed that the school was falling over.

Race days
We went home early on race days to avoid the crowds. In autumn we crunched through the fallen leaves from the huge old Elm trees and later with great sadness we watched the Elm trees being felled. We saw the end of the trams and beginning of the trolley buses, and by the time we had reached the top class of the juniors the Second World War was imminent.

Declaration of war
The newspapers and the cinema newsreels were full of the talk of war. Most families had access to a wireless as it was known powered by an accumulator which had to be taken to be recharged or by a relay system. The children were very aware of the grave situation. The solemn tones of the newsreader Stewart Hibberd struck fear into my young life. Air raid shelters were dug in the playground and we practised leaving the classrooms and lining the corridors sitting cross-legged against the wall bending forward with our hands over our heads. Gas masks were issued together with a cardboard box with a string for carrying it over the shoulder. The see through panel in the gas mask had to be smeared with soap. Great hilarity was caused during gas mask practise in class when the rubber sides made ‘whoopie cushion’ noises as they vibrated to our breathing. At home billeting officers toured the area making arrangements for host families to receive children to be evacuated from London. On Friday September 1st the evacuees arrived. The declaration of war on September 3rd ended a way of life that was never to return.