You are here: HomenextPlacesnextSchoolsnextFawcett School, York PlacenextMemories of the 1950s

I attended Fawcett School from 1955 to 1960. I lived at the time in Coldean, on the outskirts of Brighton near Stanmer Park. I was not in the immediate catchment area for the school, but for some years, I had told my Mum and Dad, that Fawcett School was the one that I wanted to attend. My mother made an application for me, and luckily, I was accepted. A friend, Michael Ray was the only other boy accepted from Coldean, and was the only pupil that I knew in the school of 700 boys.

I soon made a few friends, the first being Norman Strong. As was the case with many of the boys, Norman lived in one of the streets of terraced houses, which all ran off Trafalgar Street. These streets were later demolished, and now include the residential tower block built on the site. My teacher in 1B was Mr Bill Benson. To a new pupil the school could be a little daunting, and it was essential to quickly learn to “stand up for oneself”. 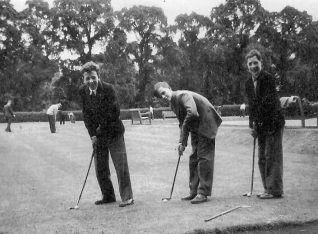 Those of us who were prefects, enjoyed the privilege of being allowed out of the school gates at break times. We would go to the baker’s shop at the bottom of Trafalgar Street to buy penny bread rolls. The smell of the freshly baked bread was wonderful. I stayed on to the fifth year, and our form teacher was Mr Webb. My main friend was Tony Hemsley, I was also friendly with Tony Williams, whose parents had a fish & chip shop in North Road. I can clearly remember a boy with the surname of Leonard, whose parents had a shoe shop in North Street.

I remember being impressed by a skiffle group, who gave a performance in the school hall. The school did not have any sports grounds, being right in the centre of town. We used to have to walk to Preston Park for cricket and athletics, and to the Dorothy Stringer School to play football. I am so glad I went to Fawcett School. I had a wonderful time, and made some great friends.