The opening of Hertford Infants School in 1931 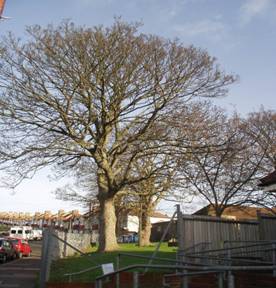 This article originally appeared in the June 2006 issue of the Hollingdean News community newsletter.

How small these sums seem to us now!
The building of the school was being planned from 1929 and began with the demolition of Harrington Farmhouse on the site, with Mr.Hamblett the tenant being paid the princely sum of £200 to relinquish his home. A Brighton company, James Bodle Ltd of Grand Parade, won the tender to build, with an estimated cost of £10,769 for what was perceived as a state of the art design.

The headteachers
In December 1930, the first headmistress was appointed, Miss M.F.Knight, who lived in Barnett Road and was later granted permission to “erect at her own expense” a gateway in the wooden fencing separating the back garden of her house from the school playground! Mr Austen and his wife arrived shortly after, appointed as caretakers and cleaners at an inclusive wage of 25s 7d per week together with a house on site, and fuel. The school was stocked with furniture, stationary and “apparatus” for £825 and opened on 21 April 1931 with 221 children being admitted as scholars who lived in the “Harrington Estate” (north Ditchling Rd, Hollingbury Park Ave, Hollingbury Rd, and Upper Hollingdean Rd.) and who had been attending Ditchling and Balfour Rd. schools.

Electrical Heating
The new school featured a then unusual system of electrical heating, no doubt popular with the caretaker, who in all other local schools would have had to manually stoke a boiler with coal.”The rooms and corridors are heated by a continuous pipe which is worked on the same principle as an electric fire. The pipe encloses a continuous bar, a prolongation of the bar used in electric fires and this, when the electricity is switched on, glows into heat. Water is carefully kept out.” The heat was controlled by thermostats which the head teacher could set and the apparatus was considered “a kind of electrical robot, doing the work that is usually associated with a brain, without human interference, the heat can be turned on a quarter of an hour before school assemblies – a single setting therefore, suffices for a term – the system moreover, entirely gets rid of the stokehole, the stoker, coal, oil, matches and smoke”.

What other news was important to the then residents of Hollingdean in 1931?
On the world stage, the Empire State building was about to be opened and Spain had just become a republic, Mussolini was jailing his opposition and Ghandi came to live with the poor in London. At home, for entertainment the BBC could offer just four evening hours of wireless programmes, whilst Brighton Magistrates debated an application for extending licensing hours from 10 to 10.30pm as one of the town’s main attractions for visitors! For the new school child Hannington’s advertised school clothes such as boy’s “grey flannel knicker suits” for 21/- and girls “regulation school Panamas” for 5/11(an extra shilling for band and bow).

For the very affluent, George Newman car showrooms of the Old Steine, offered a new Singer 6  saloon for £180. For the less fortunate, unemployment figures would rise nationally by June to 2.6 million – and in Brighton alone over 880 children that year were excluded from school for being considered to have “verminous condition” of the head and body, in some cases their parents served with a legal summons!