I was a non-Catholic pupil at Lourdes Convent from 1948 to 1954.  I remember the stunning grounds, the monkey puzzle tree, the huge cod liver oil plants (fatsia) that I used hide amongst. I remember the daisies on the tennis lawns and the grapes and pears that the nuns used to grow against the wall at the back entrance to the school that led to Cornwall Gardens, which some of us used to scrump!

I felt sorry for the boarders who it seemed spent most evenings darning grey socks and learning their catechism. I imagine I can still smell the mustiness of boiled cabbage that always lingered in the corridor as I walked past the refectory. There was a strict outdoor uniform code which was blue gabardine raincoat, navy velour hat with brim and of course the inevitable blazer. All these had to be purchased from Harrods at an extortionate price of course. The summer uniform was a pale blue dress with a Peter Pan collar and a panama hat. The hat had a habit of changing its shape if worn in a downpour, causing the crown of the hat to rise to a point. 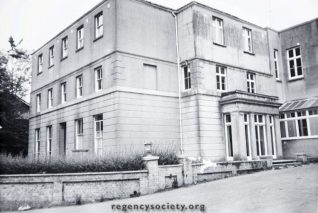 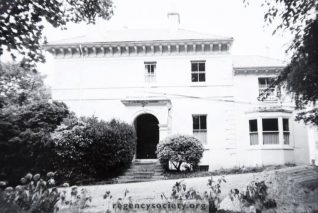 During the 1860s, when large villa-style properties were being erected in Withdean, these adjoining houses, Woodslee and St Johns, were built on the London Road, just north of Harrington Road. Woodslee was the northernmost of the two. For a long time the houses were occupied by a Catholic girls school, Lourdes Convent. The photographs were taken in 1972, just before the properties were sold for redevelopment. Click on each photograph to open a large version in a new page.

As I walked home from school for lunch I often got caught in the rain and my gaberdine raincoat was not dry enough to wear on the return journey. One day I wore a plastic plaid raincoat over my blazer and was severely reprimanded by the Reverend Mother. She beckoned me towards her from a little window at the top of the driveway. I did not need to understand her torrent of French to realize she was not happy to see my out of uniform.

The nuns were very kind

The nuns were Mother Mary Elizabeth who I recall being very kind, Mother Mary Agnes, and Mother Mary Paul. Our teacher for English was Miss Lamb, who I remember to be quite strict. Mrs Dann, who had a daughter in my class called Prudence, took us for singing (my favourite subject). Our choir used to win at the Brighton and Worthing Musical festivals. I think there was also a Mrs Thomas, but perhaps someone can confirm this. Among the girls in my class were, Charlotte Cross, Jill Upton, who was so clever I thought she must own a magic pencil, Myra Ward, Christine Bridge, Tessa Johnson, Clare Chalmers, Janet Field, Dulcie Noble, and Nicola Phillips. I think there was also a girl called Madeleine Snow.