In the winter we would build a huge bonfire for November 5th at the top of Warren Hill next to the big house with the fir trees and a flint wall round it which has long gone.  I was told the bonfire could be seen far out in the English Channel; I wonder if that were true? I do remember that the winters then were much harsher and colder, and heavy snow fall was certain every winter.

We never felt the cold
We would sledge down Warren Hill between the main road and the top of the woods or hike over to Falmer pond to ice skate. In those days we never seemed to feel the cold?  It was great fun! Woodingdean  being one of the highest areas of Brighton, would always suffer more from heavy snow fall and could be cut off for days on end. Then it was ‘No school today yippee –  get the sledge out!‘

A new school in 1948
Sister Jackie, brother John and myself attended Woodingdean County Primary School.  I was proud to be one of the first intake to go into the new school building in 1948.  I remember the day so clearly. The whole school walked from the old run-down and cold Warren Farm Buildings, along the Warren Road, to this bright and sunny brand new school. I was only six years old, but that is a day I will personally never forget. 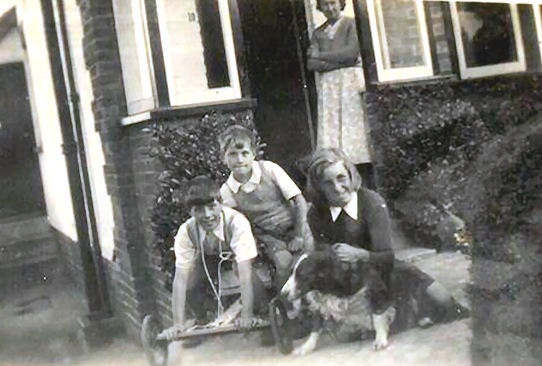 Sister Jackie, brother John and myself

My teachers
At that time the headmaster’s name was Mr. Peach; he was succeeded by Mr. Haggard. I remember only a few of the teachers. There was Miss Barns who later became Mrs. Rice. She was a real dolly bird as I remember, and a really  bright teacher who taught me for two years running. I liked her a lot. I would like to think she is still around, does anyone know?  The only other teachers I remember were Mr. Betts and Miss Bignal who later became Mrs. Betts.

Remembering Pop Hemsley
Last but by no means least, was Pop Hemsley, not everyone’s cup of tea as I remember. My parents were life long friends of Mr, and Mrs. Hemsley, and I have stayed in touch with their son Roger who is a year younger than me.  Pop Hemsley passed away about 4 years ago and I attended his funeral.  I was very sad to have missed the 50th anniversary of the school in 1998 as I was in the USA at that time.