You are here: HomenextPlacesnextSeafrontnextBlack RocknextA short history of the area

A short history of the area 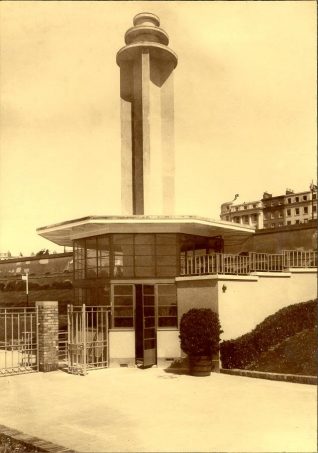 zoom
Entrance to Black Rock Swimming Pool, August 1937. Entrance to Black Rock Swimming Pool as seen from within the complex, showing the prominent tower. The discs at its summit were illuminated by neon tubes. On the opposite side of the tower was an illuminated neon sign of a woman in swimwear. Black Rock Swimming Pool opened on 8 August 1936 and measured 165 feet by 60 feet. It was designed by the Borough Engineer David Edwards in "Seaside Modern" style, with an elegant cafe and changing rooms. It closed in 1978 and the buildings were demolished.
Image reproduced with kind permission from Brighton and Hove in Pictures by Brighton and Hove City Council 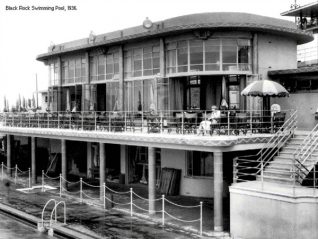 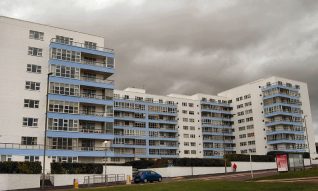 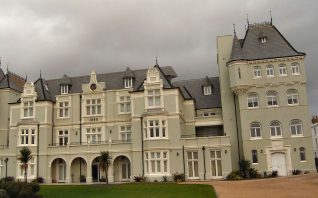 Probably named after a large rock or cave that once lay at the foot of the cliffs, Black Rock, at Boundary Road, marked the eastern limit of Brighton until 1928, a boundary which was fixed by an inquiry in 1606 after an argument over wrecker’s rights {1}.

Black Rock also marks the point where the white chalk of the South Downs meets the sea, and there are some unusual geological formations in the vicinity. Visible in the fawn-coloured cliffs behind the Asda superstore, about 15 feet above the Undercliff Walk, is a ‘raised beach’ of rounded, flint pebbles and sandy gravels up to 10 feet thick, resting on chalk. This beach was laid down around 100,000 years ago during a warm interval in the Ice Age and has yielded sea-shells and the remains of whales. Above lies a 45-foot-thick layer of ‘Coombe Rock’, a chalky rubble eroded by freeze-thaw action during the colder periods and ‘sludged’ down into the valleys by the spring and summer rains. This layer has produced fossil remains of mammoths, wooly rhinos and hippopotamuses. The strata here may be seen to curve upwards where the solid chalk of the South Downs becomes exposed as cliffs; the prehistoric coastline was once at an oblique angle to the present cliffs. This area is protected as a site of special scientific interest.  {283a,306,311}

About 350 yards offshore to the west of the Marina breakwater is the site of an historic wreck, protected from interference by statute. On the sea-bed lies a large, timber framework from which a cannon ball, an anchor and other metal objects have been recovered. The origin of the wreck is uncertain but it may be a French ship from one of the sixteenth-century raids on Brighton (see “Brighton – Early History”), or even a Spanish galleon from the 1588 Armada {304}.

The first development at Black Rock was the gas-works, established in 1818-19 by the Brighton Gas Light and Coke Company (see “Gas Supply”). This was soon followed by some terraced housing to the east, and by 1828 the Abergavenny Arms had also opened. However, constant erosion claimed the cliff top for 75 feet inland in the fifty years to 1897, causing the closure of the road to Rottingdean and the opening of Roedean Road as an alternative; large landslips continued into the 1920s. On 22 July 1932, with the cliffs now protected by the Undercliff Walk, a new 60-foot-wide highway, the Marine Drive, was opened between Black Rock and Rottingdean; the old inn was demolished at this time. The small community at Black Rock centred on Rifle Butt Road was eventually demolished for the construction of the Marina road interchange which opened in 1976. {107,112,115,116,123}

In 1824 a tunnel was constructed from the eastern end of the Kemp Town esplanade to the gas-works to facilitate the carting of coal, but it fell into disuse once coal started to be landed at Aldrington Basin, and was blocked at both ends by the town commissioners in 1850 after it had collapsed in the middle. In January 1906 Magnus Volk rented the southern entrance and, describing it falsely as a smugglers’ cave, used it briefly as a tourist attraction for his railway extension to Black Rock. The entrance disappeared completely when the corporation constructed public conveniences in the 1930s. {46,189}

Black Rock was perhaps best known for its swimming-pool, formally opened on the site of a terrace garden on 8 August 1936 and necessitating a slight shortening of Volk’s Railway. The pool, 165 feet by 60 feet, closed in 1978 and the handsome changing room and caf..e/. building was demolished, but the site still awaits a water ‘theme-park’ development. The most prominent building on the cliff top is Marine Gate, a large, eight-storey block of 105 flats erected around an open quadrangle in 1937-9 to the design of Maurice Bloom. There was a large public restaurant until it was converted for further residential accommodation in about 1955, but the block’s proximity to the gas-works resulted in a good deal of bombing during the war and it received a direct hit in 1944. Courcels is a seven-storey block of 1971, while the nearby French Convalescent Home opened in 1896 (see “Marine Parade”). The undercliff at Black Rock is dominated by the Marina (q.v.). {3,45a,116,123}

Update to the text
A major cliff collapse in recent times, followed a winter of intense rain, and the soft layers of Coombe Deposits in the cliff behind ASDA failed and a major fall blocked the Undercliff Walk and almost reached the store. The walk was closed for some time before extensive work was carried out to sensitively secure the cliff face in what is an important natural site, designated a RIGS[Regionally Important Geological Site] by English Nature.