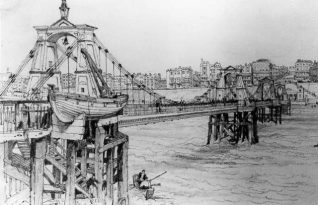 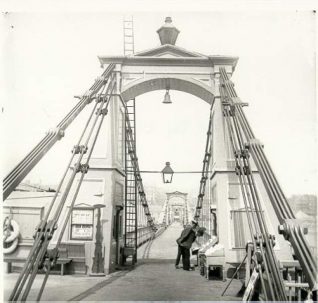 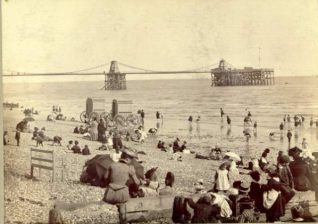 zoom
Bathing Machines near Chain Pier, c. 1890: Children paddling in the sea, watched by their families from the beach. Two bathing machines at the water's edge.
Image reproduced with kind permission from Brighton and Hove in Pictures by Brighton and Hove City Council 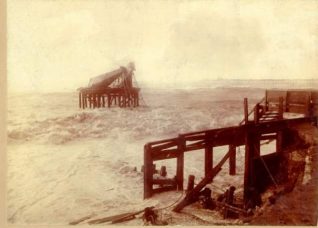 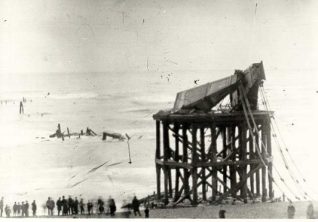 a) CONSTRUCTION: The growth of cross-channel traffic via Brighton and Dieppe in the years following the Napoleonic Wars necessitated a more suitable means of embarkation and disembarkation than the small boats which were launched from the beach to meet the larger vessels. It was principally for this purpose that the construction of a pier opposite the Steine was proposed, although the site was later moved to below the New Steine following objections from fishermen and bathers.
Construction commenced on 18 September 1822 under the direction of Captain Samuel Brown, who had designed the Union suspension bridge over the Tweed and a smaller chain pier at Newhaven near Edinburgh in 1821. Although construction was hampered by a series of storms, rapid progress was made following a change in the workforce by Brown who brought in ex-naval men. The first piles were completed in January 1823 and by July the chains were in position. The pier was completed in September 1823 at a cost of £30,000.
The deck of the pier was 1,154 feet long and 13 feet wide, supported by chains suspended from four cast-iron towers spaced at 260 feet intervals on wooden piles driven into the seabed. The chains themselves were carried 54 feet into the cliff through a bazaar, and affixed to 3-ton steel plates set in cement. The pier-head, used as the landing stage, was a platform of Purbeck stone 80 feet wide. Access to the pier was either via a new esplanade along the foot of the cliff from a toll-house at the Old Steine, or down a flight of steps from New Steine.

b) OPENING and EVENTS: The Royal Suspension Chain Pier was opened on 25 November 1823 with a procession and firework display, but, to the disappointment of the town, without royalty being present. It proved an immediate success with both cross-channel travellers and also with promenaders who were charged an admission of two pence or one guinea annually. Although embarkation piers had already been constructed at Ryde in 1813-14 and at Newhaven (near Edinburgh), the Brighton Chain Pier did have attractions which were designed purely for the pleasure of promenaders and therefore may claim to have been the first pleasure pier. Kiosks were opened in the towers and several other attractions opened in the following years included a bazaar, saloon lounge, reading room and camera obscura at the shore end. The pier also attracted many artists with its graceful outline, including Constable and Turner.
Nevertheless, the Chain Pier proved to be an important point of embarkation. and with several steam-ships operating daily to Dieppe, Brighton became the busiest cross-Channel port in England for a time as it was on the quickest route between London and Paris (as overland speeds were roughly the same as those at sea). Facilities were never as good as a natural harbour though, and the opening of the railway to Newhaven in December 1847 brought an end to most of the passenger traffic from Brighton. On 15 October 1829 the Duke and Duchess of Clarence, who enjoyed daily walks along the pier, disembarked from Dieppe. In 1843 Queen Victoria was received from France in the royal yacht by the now Sir Samuel Brown before embarking for Ostend a few days later.
The weather was not so kind to the pier, though. On 24 November 1824 the toll-house was swept away during a storm, but worse was to follow on 15 October 1833 when the pier itself was struck by lightning resulting in a disastrous fire; the second and third bridges were destroyed, but a public subscription raised £1,300 to repair and strengthen the structure. Another storm on 29 November 1836 caused the centre bridges to oscillate and the third bridge eventually fell into the sea, but the pier was once again repaired.

c) DECLINE and DESTRUCTION: In 1872 the Aquarium was opened on the site of the Chain Pier’s esplanade and toll-house, so two new toll-houses were erected at the shore end of the pier by the new Madeira Road. A plan was then devised by that supreme pier engineer Eugenius Birch for the addition of a marine kursaal; parliamentary sanction was obtained, but Birch died in 1884 before any progress could be made.
Throughout the remaining years of the century the Chain Pier, with its modest attractions, continued to lose custom to the newer facilities at the Aquarium and West Pier. In 1891 the Marine Palace and Pier Company obtained permission to erect a new pier opposite the Steine provided that the old pier was removed. The Chain Pier remained open until 9 October 1896 when it was declared unsafe, the pier-head being some way out of vertical, but a great storm just two months later, on 4 December 1896, completely destroyed the structure at about 10 p.m. The wreckage caused considerable damage to the new Palace Pier which was then under construction, and also to the West Pier and Volk’s Electric Railway.
Although the pier foundations remained visible at low tide until 1949, there is now no sign of the former Brighton Chain Pier, but its position is marked by a plaque in the sea-wall above the eastern end of the Aquarium Sun Terrace. The bazaar remained under the cliff until 1927 when it was demolished during the reconstruction of the Aquarium and its arcade. However, the two entrance kiosks on the shore were saved, and were later added to the Palace Pier where they remain, flanking the entrance to the main Palace of Fun amusement arcade {131}. Samuel Brown’s house at 48 Marine Parade, now known as Chain Pier House, bears a plaque to the pier’s engineer, and a silver urn presented to Brown by the town may be seen in Brighton Museum along with a model of the pier.

Any numerical cross-references in the text above refer to resources in the Sources and Bibliography section of the Encyclopaedia of Brighton by Tim Carder.The following resource(s) is quoted as a general source for the information above: {3,142,144,145}