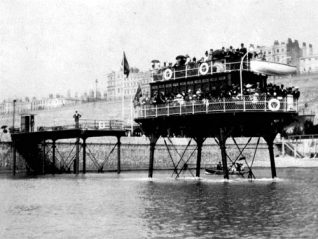 zoom
from the 'My Brighton' exhibit

Were there rails built into the seabed for this to run? How long did it last for? Why did they think that that tiny life boat at the rear could take all the passengers? Aren’t you glad that Health and Safety rules are much better these days, so that such a crazy idea would never get off the ground, or out of the sea, now?

The rails were set onto concrete blocks cemented onto the wave-cut platform at or just above the low tide level. They were removed for scrap around 1908-10, the metal probably being used again in German armaments during the Great War! The railway itself lasted only about five years in service, but the concrete blocks remain to this day.

As for the lifeboat, I suppose you could say that ships (and sea-going tramcars) applied the Titanic rules of elegance rather than utility or safety until April 1912 …

A double line of track of 2 ft 8½ inch gauge was laid, the tracks being 18 feet apart between the outer rails. The rails were secured by steel clip-bolts 6 inches long grouted into concrete blocks measuring five feet by three feet . These blocks were morticed into the chalk bedrock and were approximately three feet apart, some pairs can still be seen at low tide east of the Marina.

Building commenced in June 1894 and the line opened on 28th November 1896. The line closed not through mechanical failure or storm damage but because the Corporation wanted to extend groynes and removed a section of track in January 1901 thus rendering operation impossible without an impractical diversion further out to sea.

The lifeboat was an ornament rather than being of practical use but no doubt complied with Board of Trade requirements when they inspected the line – they insisted on lifebuoys. The liner Titanic also satisfied the Board !

If the Daddy Longlegs were still operational in its historic form or in a modern guise it would, I am certain, be a wonderful tourist attraction. As the correspondent of the New York Herald stated on the opening day “Mechanically, and as a seashore novelty, it beats anything yet done by us inventive Yankees.”