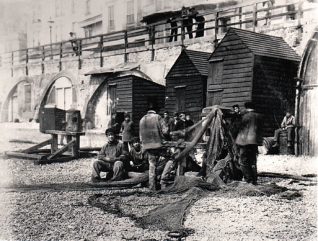 c) PROSPERITY and DECLINE: In Tudor and Stuart times the fishing industry prospered at Brighton, and in 1601 the largest ever fleet of sixty-six boats sailed for the Yarmouth fare. However, restrictive practices operated by the Yarmouth fishing community caused the Brighton fishermen to present a petition to Parliament in 1609. In 1626 the fishermen again petitioned Parliament, this time for protection from French and ‘Dunkirker’ pirate ships after fourteen boats had been seized. Erosion of the foreshore, where the fishing workshops were concentrated and onto which the boats were hauled, continued unabated from around the 1640s. Together with a general slump in the demand for fish, these adverse factors contributed to a marked decline from about 1650 onwards and many Brighton fishermen took to coastal cargo trading. No more boats were sent to Yarmouth after 1697, and the fifty mackerel boats at the end of the seventeenth century were reduced to half that number over the next thirty years. The LowerTown was completely destroyed by 1705, and by the mid eighteenth century the fortunes of the town in general had reached rock bottom. {11,12,17}

A 1770 description of the town reported that 300 men and 100 boats were still involved in the Brighton fishery. Oysters were dredged in the spring; May, June and July were spent catching mackerel at night, together with red mullet in May and lobsters and prawns in July; flat fish were trawled in August; whiting were caught with hooks in September and October; and herring were caught in November. Dealers from London purchased the catch at the fish market on the beach, while some herring were dried or pickled for foreign markets. {282a}
Employment connected with the new health resort function resulted in increasing numbers of fishermen leaving the sea in the latter eighteenth century. Nevertheless, great disputes arose in 1776 and 1822 over the use of the Steine , where nets had been dried and boats hauled to safety for centuries; the fishermen tried to invoke their ancient rights to these practices but were defeated by the town commissioners. Most of the Brighton fishermen were said to live in the poor Russell Street area in the nineteenth century, and a Bethel chapel was opened in West Street in 1830; a Sunday School for their children was later established in the King’s Road Arches. {6,7,15}

The decline of Brighton’s fishing industry continued throughout the nineteenth and twentieth centuries, especially when refrigeration enabled fish to be brought into the town by rail after the First World War. In 1862 it was reported that there were 150 fishing boats but the manor of Brighton-Lewes could still claim six mackerel from each trip. In 1902 there were still eight-eight fishing boats operating from Brighton, with the fishermen living mainly in the Russell Street and Carlton Hill areas; herrings were smoked on ‘dees’ in Carlton Row . By 1948 the number of boats had declined to forty-eight, and by 1963 the weight of fish actually landed on the beach at Brighton was less than one ton per annum {123}. Today only a handful of fishermen operate from Brighton beach, principally from the area below Royal Crescent , but several larger fishing vessels use a special berth near the eastern end of the Marina , while other boats now operate out of Shoreham or Newhaven, selling their catch at the Circus Street market. The Brighton Fishermen’s and Boatmen’s Protection Society still operates at 200 King’s Road Arches, below the Old Ship, and a boat winch, named after the bathing woman Martha Gunn , was recommissioned nearby in 1984. {1,2,48b,123}